DXPEDITION TO THE ISLAND OF ANNOBÓN 2010

We started preparing for the expedition to the island of Annobón in early October 2009. It was during that month we started our with the Government of the Republic  of Equatorial Guinea.

Our goal was to reach the island during the month of April, and knowing the interest that 3C0C had, and has, on the low bands and CW mode, the our focus was on these modalities.

For some reason beyond our control, we could not post these modalities on the internet, so we worked every day in the project. We contacted EC4DX Javi and asked him if he would be our webmaster. Also, we talked to EA7FTR as we needed a manager. I remember our conversation and answer his answer clearly, “ Yes, of course!  I´ll be the manager of Annobón 2010.

Our pilot would be EA5YN Vic,  later Paul VK4MA joined the group. 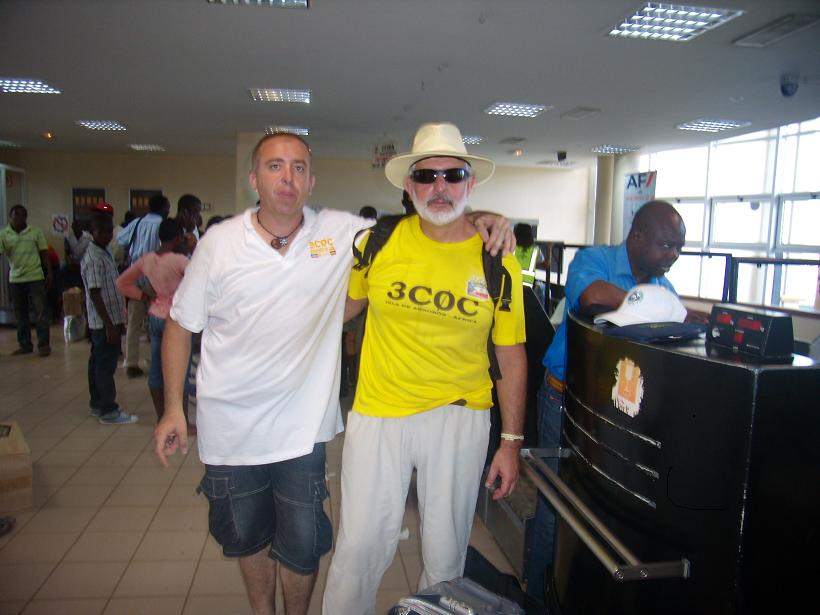 Everything was going well, albeit with caution, for our expedition to the island of Annobón. This was no easy task as the site is restricted, and I think, Ham radio travellers easily understand my worde.

The Dxpedition operators would be Javier EA5KM and Elmo EA5BYP. Some might wonder why we did not more operators, even though we received some proposals from operators to join the group- these came too late. All the permits and authorizations were prepared and modifying them was almost impossible.

Honestly there was no way to expand the group. There are details that I will not mention in this report, but we believe it was not possible to extend, at least with all the steps that I have personally made.

So Javier and Elmo, worked hard. We started to apply for grants, since the project was very expensive for the two operators. The Northern California Dx Foundation, Lynx Dx group, Lone Star Dx Assoc. responded to our request for help, them other groups and individual support. Also communications-related companies came through to help the expedition.

We wanted to take good antennas, equipment and amplifiers. We wanted to give hams the opportunity to work Annobón, especially all who needed this country.

My dream has always been to work 160m from 3C0 so the desire, dreams, everything had to be managed well.

During the project, we had the idea of working in two locations – on the island of Bioko-Malabo, the capital city of Equatorial Guinea. There has been no activity in this country for several years. Communications Ministry itself liked our idea, and of course our operators loved the idea.

We could activate two good DXCC Entities. Our permits were granted: 3C9B to Bioko and 3C0C to Annobón.

During the month of January, though not the time announce our expedition, we had to make it public. There are DXCC entities that advertise their expeditions too far in advance. We had to wait to do it until we got the authorization from the country of Equatorial Guinea.

Things got a little worse, though in truth, it came in April. We still could  not get out – the order to travel did not come. Now May would be our month of departure, but it was not good. This month we were  told that our plane could not possibly land on the island , due to some repairs to the runway. We stayed in Stambay, waiting for better news,. We had to ensure our arrival and our departure from the island. In the en, we travelled on a barge. The trip lasted three days, saliling from the city of Bata. It honestly was not a safe way to travel. My last experience whit this mode of transport was, unfortunately , not pleasant.

We receive the notice to travel in late May and in a week had everything ready. We would go from Alicante to Madrid, then from Madrid to Malabo and Bata to Annobón.

We arrived in Malabo at midnight Thursday, June 3, 2010, but not arrive at our destination until dawn. We had to  settle all customs which took some time. But finally we were in what would be our next Shack for 3C9B.

On Friday morning June 4 we started the installation of vertical Steppir and some dipoles. We initially activated a single station thinking we would relay each other in order to spend as much time as possible on the radio. Also here in Malabo, we worked to collect all the necessary provisions for survival on the island for 14 days. 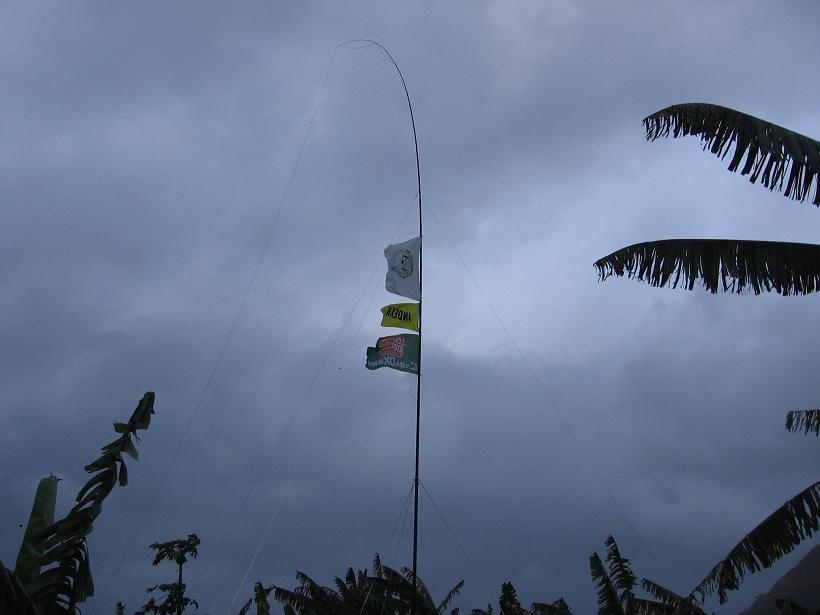 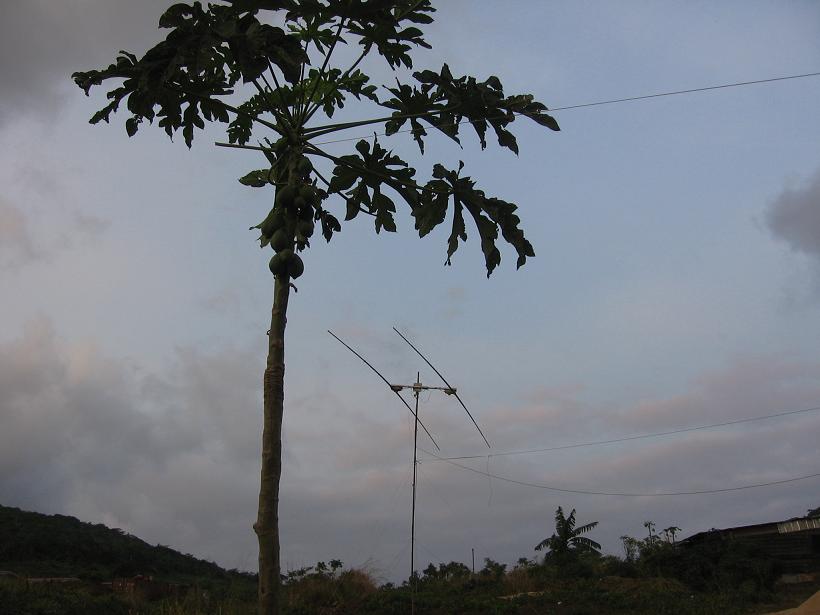 All the logistics in Malabo would be Elmo´s as knows the country very well. Harvey would look to keep the pile-up constantly. ( editors´note : What does this mean ? )

Bioko is currently rainy, and occasionally a tornado can be seen in the city. While mounting the vertical, Javier could taste the strength of this phenomenon. No more problems! Finally the antennas were installed. In Malabo electric power are normal and continuous. We had the bad luck of having our Shack in the wrong location. We were left without power for nearly a day because of an accident in the building. Also, propagation was not much during the morning . it was quite poor and on some bands we could not hear anything, yet we installed a second station.

We had to seize the moments when the two operators could be on the air.

On Sunday afternoon June 6 we dismantled the antenna and returned to pick up all our packaging. The next day, Monday early morning 07.00 UTC, we moved to Bata, the Guinean capital of the continent, where a small propeller plane was to take us to Annobón.

Our boxes and baggage was too bulky. Apart from our material, we had to addd a few boxes of supplies. Currently on the island one can not find the basics to live even fish, a staple, was a little low. The island has seen a huge change,,, new buildings, some roads, more vehicles; also, possibly, a new port within a few years. The island will be completely changed, even to some Annoboneses, as well as to us.

We arrived ,id-afternoon of June 7 in Annobón. After carrying all our stuff to what our future 3C0C Shack would be, we had to introduce ourselves before the authorities of the island, presenting all our credentials ,passports and explain our purpose for being on the island.

Late in the day, we installed the Steppir, the vertical antenna for the 80m coil.

Due to the time and being tired, we left the rest of the installation  for the next day. On the moning of June 8 we set up the antennas; 2 Steppir elements, 5 elements yagi antenna for 6m. in the afternoon we had everything ready to go on the air. We did the 160m vertical to install the following days, and we needed a good place for its location. We did not want to make mistakes. 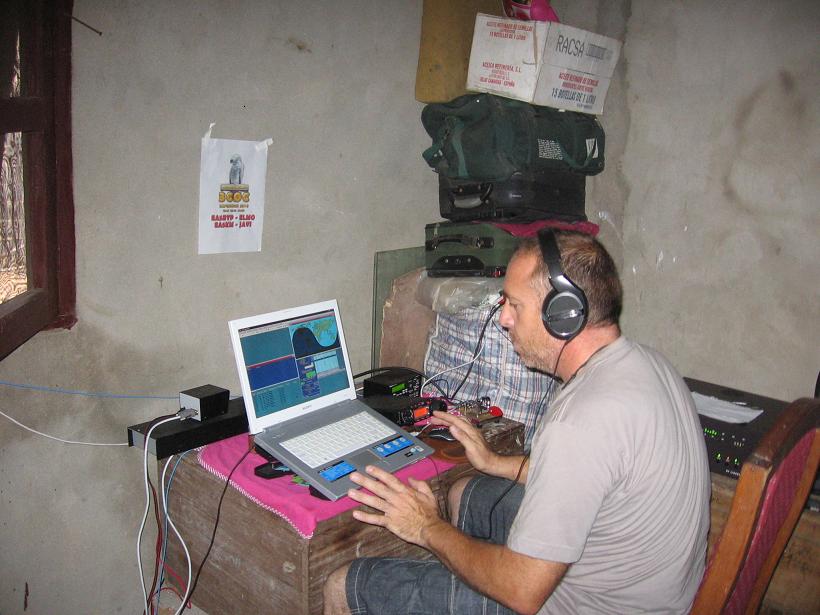 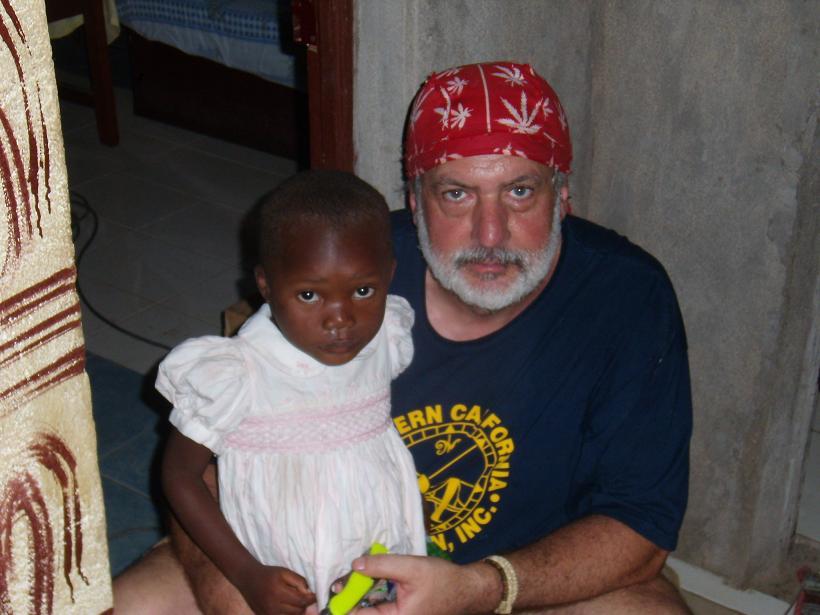 Unlike Malabo, which is now in the rainy season, here in Annobón is the dry season. The humidity is high, and the worst that can happen is the emergence of some unexpected serious damage. This is what happened on the fifth day, Friday June 11. We could not help it. We realized two elements of the Steppir antenna fell to the yagi pointing severe  damage. The antenna was unusable. We where  desolate. Even with  the Yagi pointing to USA the signals were very low. We tested step by step, short and long, we did not find ideal time. We were aware that may U.S. hams were watching us, and it was sad that we could stop the pile-up of Europe so the signals did not reach USA. And now the yagi was out control so we had to improvise and use vertical dipole parts that we had.

Our antenna for 50 MHz was installed and we always had an open transceiver on this band. We even announced SSB operator often as we continuously on 6m – still no signal of any Continent came to Annobón.

On the third day we found the ideal site to place the 160m antenna. The site was very good, near the beach. We tried, but here again, we heard no signal. The noise was terrible QRM.

The generators were a problem, but they were not important, we had enough spare generator diesel for several weeks.

The unpleasant surprise came on the 16th day when we told that we should leave the island. We would have to take the last flight now or wait several months while repairs were made to be runway. So we had several choices, expect a barge next month to pick us, wait until October for the next flight or leave the next morning for Bata – Malabo. We chose to leave the next day.

Sadly, we had not finished our 3C0C welcome, but we had to leave. Back to Bioko, reorganize and resume operating as 3C9B.

On June 20, we ended the trip, collect our gear throughout Sunday and pack all the material left behind days before. It was a lot of hard work and we were very excited. The dxpedition may not have been as we would like, but we are happy with our work. We thank all who helped us bring the Dxpedition to this small island in the Atlantic 3C0C 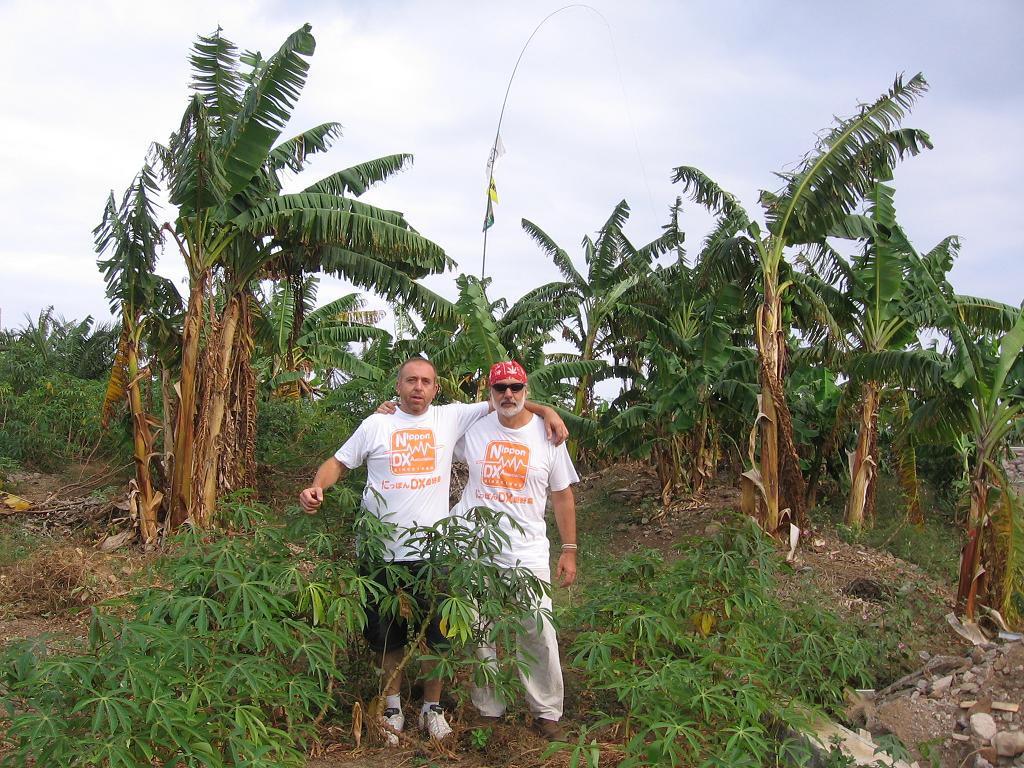