After a few months of preparing the dxpedition my XYL brought us to the busstation in Waalwijk. Together with 2 suitcases and a plastic pipe within the glassfibermast, we travelled by bus and train to Schiphol airport, Amsterdam. Like our planning we will fly at a pleasant time, just a few minutes after 3:00 PM. After a nice flight we arrived in Accra at about 22:00 PM. Time in Ghana is in GMT, so we had only 2 hours of time difference with The Netherlands. So, we had no jetlag. After we passed immigration and customs without any problems, we walked through a hot blanket of air outside the airport. Here a taxi was already waiting to transport us to our hotel in Accra. It is not recommended to travel in Ghana in the dark, besides we still didn’t have the paper license, we received many commitments by phone and e-mail but we didn’t receive a copy of the license by e-mail. A taxi picked us up for our travel to Ampenyi. But first we went to the National Communication Authority for receiving the license. No problem, Mr Timothy Ashong and Mr Codjoe handed over the license. Unfortunately we didn’t obtain the requested callsign, 9G5LK was not available, but they gave us two other callsigns. It was not a big problem for us. After all our goal was to transmit legally in Ghana. We made some changes to our website and  on QRZ.com. After a 4 hour travel by taxi, and many police controls we arrived at Ko-Sa beach Resort in Ampenyi in the afternoon. The little house was situated on the side of a small compound, therefore the glassfibermast with 20m HyEndFed antenna was not in anybody’s way. Also the antenna was mounted between the palm trees, but this antenna performed not as well as the other antennas. After the arrival we immediately installed the radio equipment as well. Because we had a sked in the evening with an airplane somewhere in the 20m band. 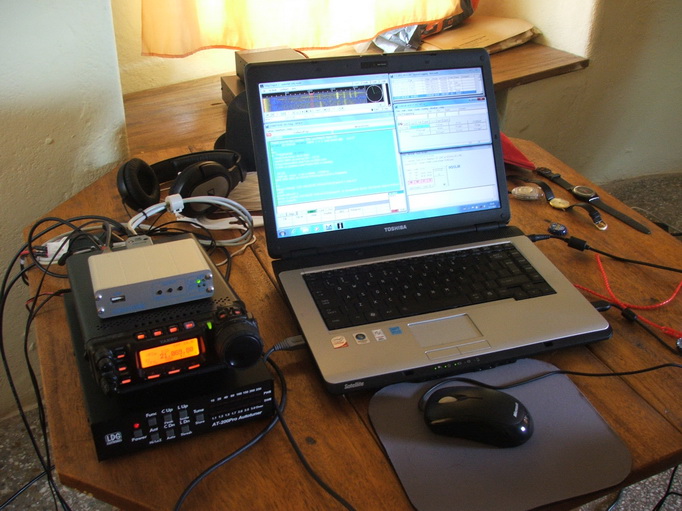 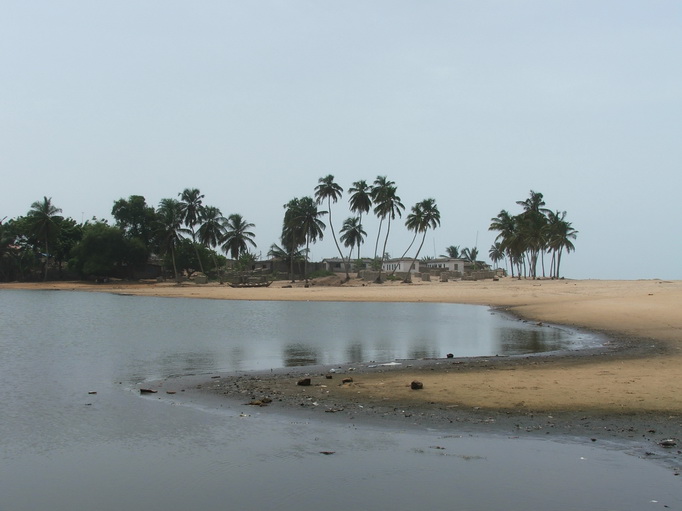 At the location we luckily had 230V, but the voltage varied in the evening between 90 till 230 Volt, and after having switched power supplies the voltage varied between 8.2 till 13.8V. Nice if you are in a huge pile-up. Also the lightning of the set became weaker and the fan which  was supposed to provide cool air in the house didn’t rotate so fast anymore. Luckily our laptops are buffered with an accu. This is a real dxpedition now. We didn’t want to take any risks, so we took 2 identical transceivers with us. One station for SSB and the other for digimode’s. If something would break down during the dxpedition, this wouldn’t be a great disaster. Also for this, we put all the radio equipment in the hand luggage. Apart from that we had no problems with the luggage on the airports. The scanner didn’t recognize problems, so we didn’t get any questions about the equipment.

Because we were travelling by plane we took a minimal radio station with us. This exists of 2x FT857, 1x LDG tuner, 1x Funkamateur digi interface, 2x laptop and 2x switching power supply. The antenna’s exists of a HyEndFed for 20m, this one did his job really well, also a G5RV and a 10m delta dipole. Quite a suitable set up for a dxpedtion. On location we also checked the antenna’s with a miniVNA. All measurements seemed to be ok. Also the TRX did what we were used of it. We used the headset only the first day, it didn’t worked that well because of the tropical warmth in a clay house without air-conditioning. At a next dxpedition we will take a lighter and cheaper computer headset with us. Because we were now using two different callsigns, we didn’t put the laptops in a network. Each laptop logged one call, 9G5LL or 9G5LM. So, the cross cable stayed in the suitcase.

On Monday we woke up at 5:30 AM to make QSO’s, using the grayline and afterwards we went to Kakum National Park by taxi, where you pass a series of hanging rope bridges on canopy level of the rainforest. We walked together with a group of Ghanaian students, the boys and girls were really enthusiastic. They really liked walking with us across the small gang board and so did we. They were worried that we would be scared. But no, we had the impression that they were the ones having problems with the height. After this we went to Monkey Forest. Many animals which were “founded” are brought here and are cared for by the Dutch owners, after which they will be replaced in nature. The taxi drive already was an expedition. We thought there weren’t any shock absorbers in the car, also the instruments weren’t working anymore. The last one stopped at 250000 km. We also had our doubts about the exhaust system, because of the strange smell in the cab. But no problem the windows were always open due to the warm climate, so we did get enough fresh air. For only 25 euros you can be driven by cab for almost a whole day, it’s really cheap.

During the dxpedition we activated SSB, CW, RTTY and PSK, especially the QSO’s in RTTY and PSK were appreciated by other radio amateurs. These are modes which have not been activated from Ghana many times. We also tried to send an e-mail with Winmor, unfortunately that failed. Because we didn’t have internet, we couldn’t see on which bands there were activities, we could only recognize activities by scrolling over the band. Because we brought antennas of 6m-80m with us, we were flexible in choosing a frequency. Only during the daylight hours there were no activities on the band. We made the most contacts during the grayline in the morning and evening. Because of this we made a schedule, 9G5LM (PE1KL) started at 6:00 UTC in digimode, so Lisa 9G5LL could sleep longer. She took the grayline in the afternoon in SSB. Mostly from 16:00 UTC till 19:00 UTC. After this it was dinner time. Apart from that we did eat really well in the restaurant at the beach resort. Most of the times we had local dishes and  a bottle of Ghanaian beer. Good food is delivered for fast food prices here. After dinner we again went QRV in SSB till about 22:00 UTC. Because the warmth was exhausting for us, 9G5LM went at that time QRT after which 9G5LL continued in digimode till 2:00 UTC. This schedule did work well. 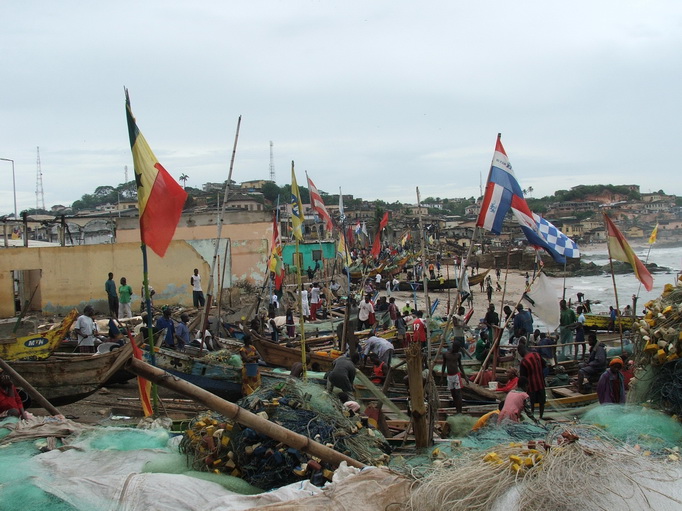 The house provided only cold streaming water, because of the insecure supply of water we had a 2m² gravity tank which was outside, it was a matter to keep this full so if there was no water available we would have a buffer. The water of the douche- and sink went to an open well, only toilet water was discharged via a septic tank.

We also visited Cape Coast and Elmina, where our European forefathers traded slaves. Under terrible conditions the slaves were collected here and then shipped to the west. Luckily, on inquiry the guide told us that there is no remorse. We also walked through Ampenyi with a guide, a fishing-village in the neighbourhood. It seemed like time had stopped here a 100 years ago. People were living in simple clay houses with a roof of corrugated plate or a roof of leafs. Besides a little toilet building in every village, there were plastic water tanks placed by UNCHR as well. After having been active from Ghana a week it was time to go back home. The travel back from Ampenyi to Accra was an experience by itself. Because we had to be at the airport at 18:00 we had all the time to leave. At 11:00 AM the taxi with air conditioning picked us up, luxury. The cab driver thought there was something wrong with the cab, so we went to a workshop first. It was no problem for us because we had enough time and we had taken these kind of delays into account. Above all we wanted to arrive safely in Accra. The workshop consisted of a wooden hut with the most exclusive parts, which you can only find in a scrap yard. The mechanics lifted the car while the engine was still running, and the brake piston was greased with oil.The grooves in the brake disc were so huge that the car wouldn’t be allowed to drive in Holland, and don’t get us started about the badly damaged brake-blocks. The cab driver was happy with this reparation and told us that he was confident our travel would end well. Of course in Accra we ended up in a traffic jam, it was really hectic. At one moment a police bike was driving in between the cars which were also in the traffic jam. The cars who didn’t leave him enough space, received a kick from the police’s boot. After him, an armoured coach followed, with a dignitary who had to be at the airport in time seated inside. These are situations you wouldn’t expect in 2011, but our cab driver told us this was quite common.

We arrived at the airport on time. Lisa had the biggest problems in trying to depart Ghana, the custom-officers wanted her to stay in Accra. When she replied that she had to go back to school, they said that didn’t matter, “There are schools in Accra as well!”. But after this pest shot she did get permission to leave the country. After a rough flight we arrived in our small home town in The Netherlands more than 22 hours later. We have good memories about this dxpedition in Ghana, also because we proved it is possible to go on a nice dxpedition with minimal equipment. Also the cooperation of the always friendly and kind people of Ghana was a welcoming surprise for us. 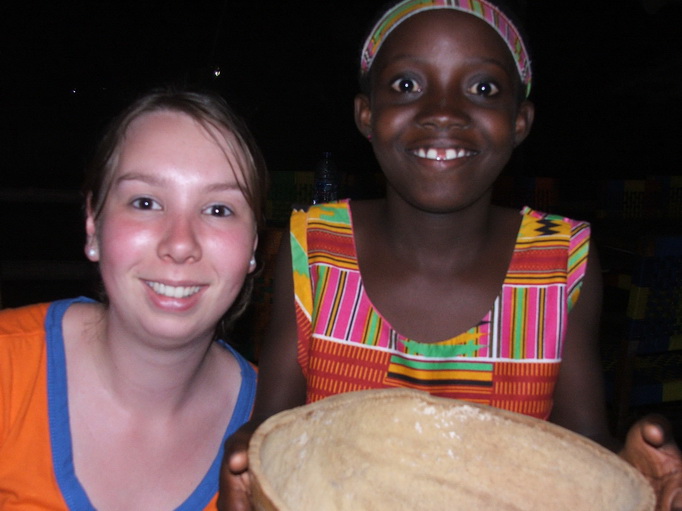