Four German radio amateurs went on DXpedition to Rwanda at the end of October 2010 for one week. Part two of their journey took them to the neighbouring country Burundi for one more week.

It was a great pleasure for me to go on a DXpedition into the deepest Africa with the experienced DXers Sigi – DL7DF, Frank – DL7UFR and Wolf – DL4WK. What propagation conditions would expect us there, in particular on the lowbands? How about the logistic condition? In Africa, everything is moving leisurely. Therefore we started early to take care of the license formalities and book the flights. Wolfgang designed a DXpedition logo and DXpedition T-Shirts for us.

Both countries are located in the heart of Africa just below the equator, on a plateau far from the sea. Rwanda is a densely populated country (487 per km²) in East Africa. It is bordered by Burundi, the Democratic Republic of Congo, Uganda and Tanzania. Because of its throughout hilly landscape it is also called „country of the thousand hills “. From 1884 to 1916 Rwanda was a German colony (Kigali was founded by a German), 1962 received it its independence from Belgium. The official language is now English. Not least because of the conflicts between the ethnic groups of the Hutu and Tutsi – which culminated in the genocide at the Tutsi 1994 – the country ranks among the poorest in Africa, although in the last years progress was achieved. We felt Rwanda is clearly advanced, the people are openminded and hungry for knowledge. The southern neighbour state Burundi, our second destination, has borders with the Democratic Republic of the Congo, Rwanda and Tanzania. Burundi also was a former part of German East Africa. Both countries are similar in size with 26.3 or 27.8 thousand square kilometers. In Rwanda live 11.1 million and in Burundi 8.7 million inhabitants. Nearby the hotel « Club du Lac Tanganyika » is a large camp of the UN. 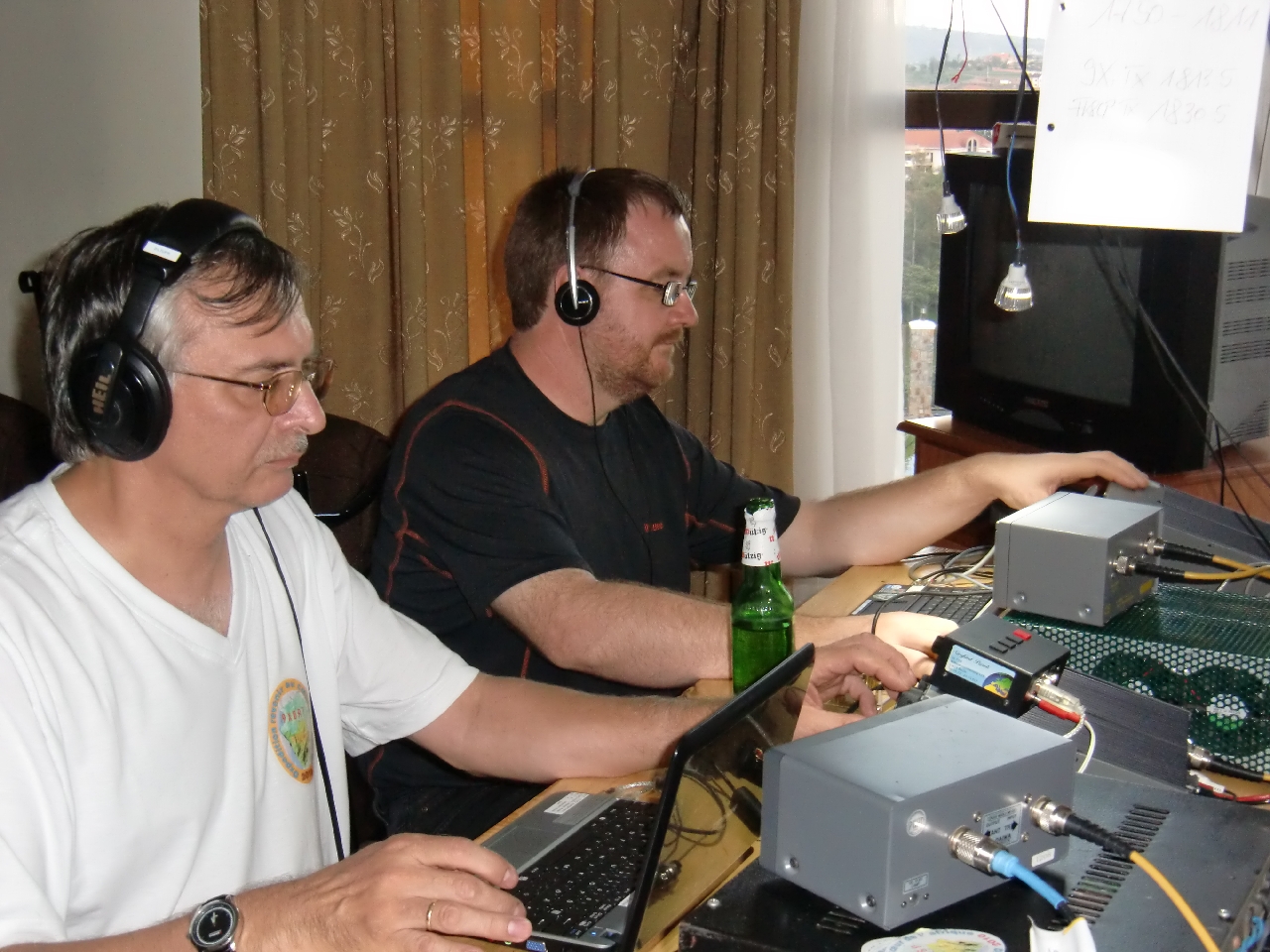 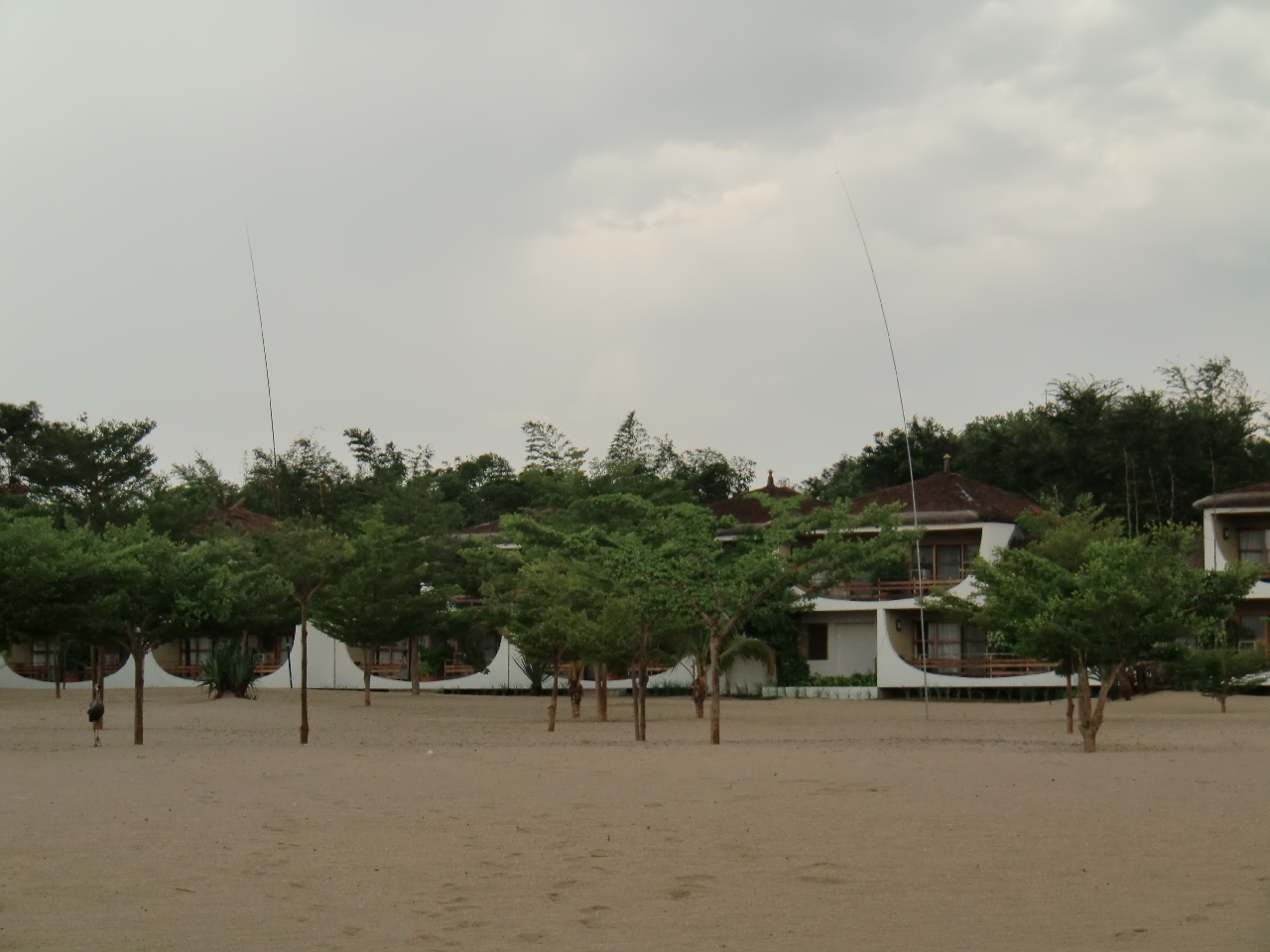 For Rwanda, Tom, DL2RUM assisted us in our preparations. During several QRL-stays between July and September he supported our license applications and to find a hotel to permit amateur radio operation. He himself was QRV as 9X0TL. Before we left for the DXpedition, everybody of us had their own license certificate. Though, we only used Sigis call sign, in order to avoid unnecessary duplicate QSOs during the short 5 days. After the arrival at the international airport of Kigali and the trip to the hotel gulf Hills Residence, there was very heavy rain, which even flooded the hotel lobby. The hotel and its large garden is situated on a small hill. The surrounding area only rises toward northwest and just for a few meters. The WiFi internet access in the hotel was good and usually available, so that we were always well informed about amateur radio activities.

Thanks to the friendly and generous support of the staff adequately sized rooms were assigned to the team and we took up building our first antennas, the HF9V vertical and the 80 m vertical. The great experience of the crew acquired in many years of numerous DXpeditions proved to be an excellent and indispensible source of knowledge for setting up the expedition stations and antennas efficiently and fast. I owe full respect to the many solutions and workarounds. For example, the 2-watt LEDs worked perfectly as station lighting, slim, lightweight and powered directly from the 13-V power supply, I count on it.

Around 17.30 local time, bright daylight turned into complete darkness  within 15 minutes, as usual in Africa at the equator. After setting up two complete stations we made the first QSOs with the call sign 9X0SP. Representatives of the telecommunications authority visited us and examined our radio activity. 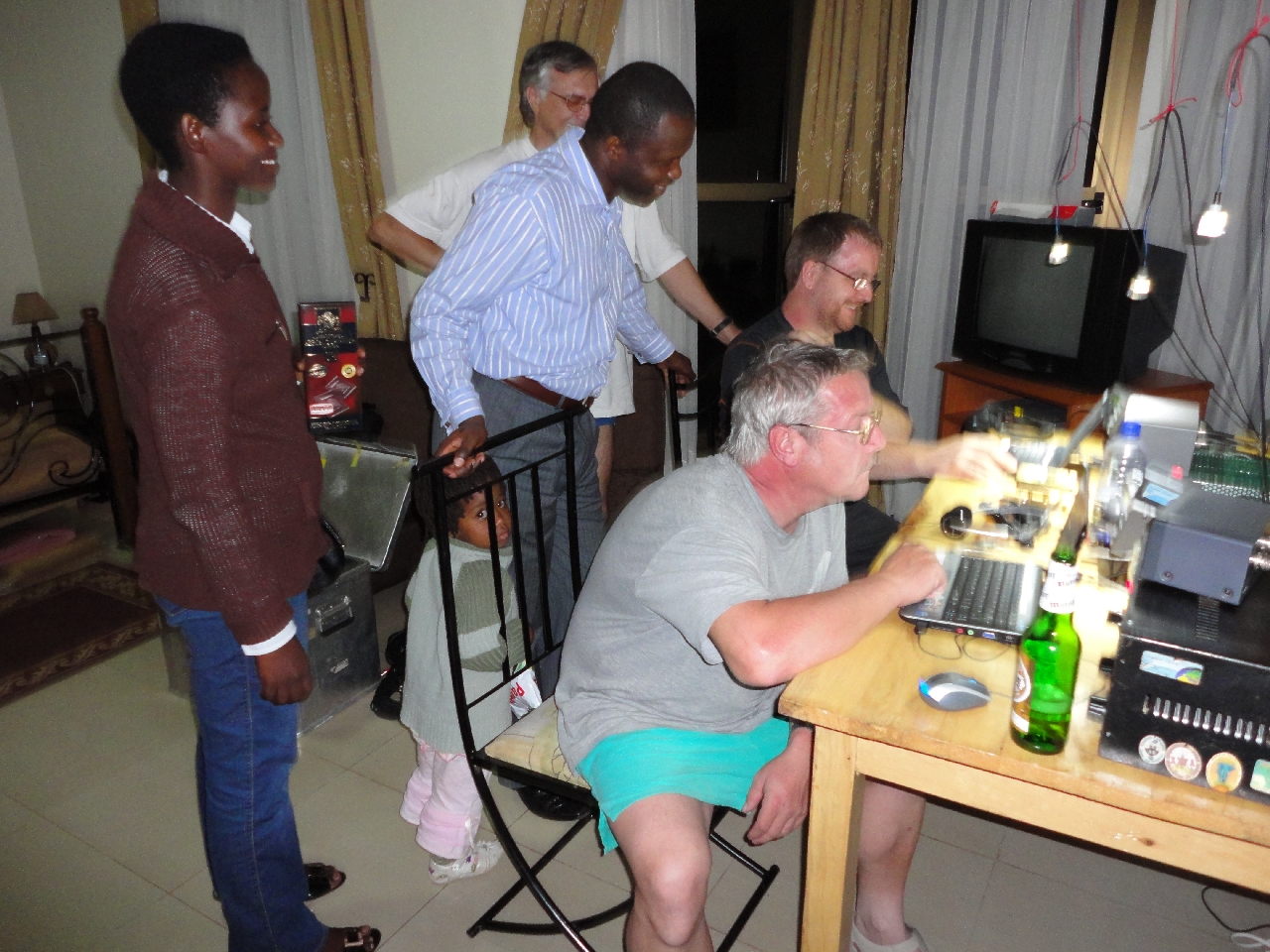 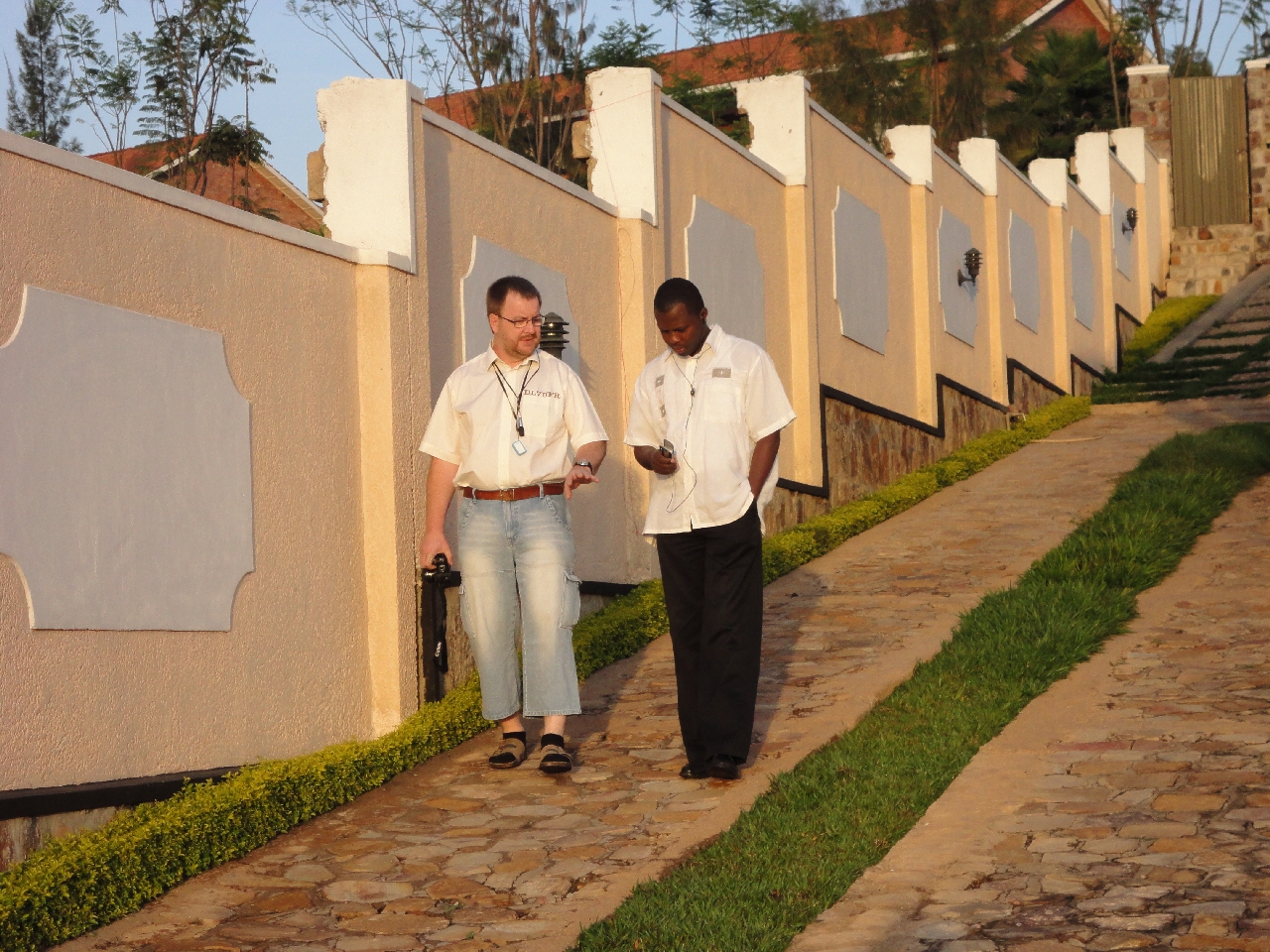 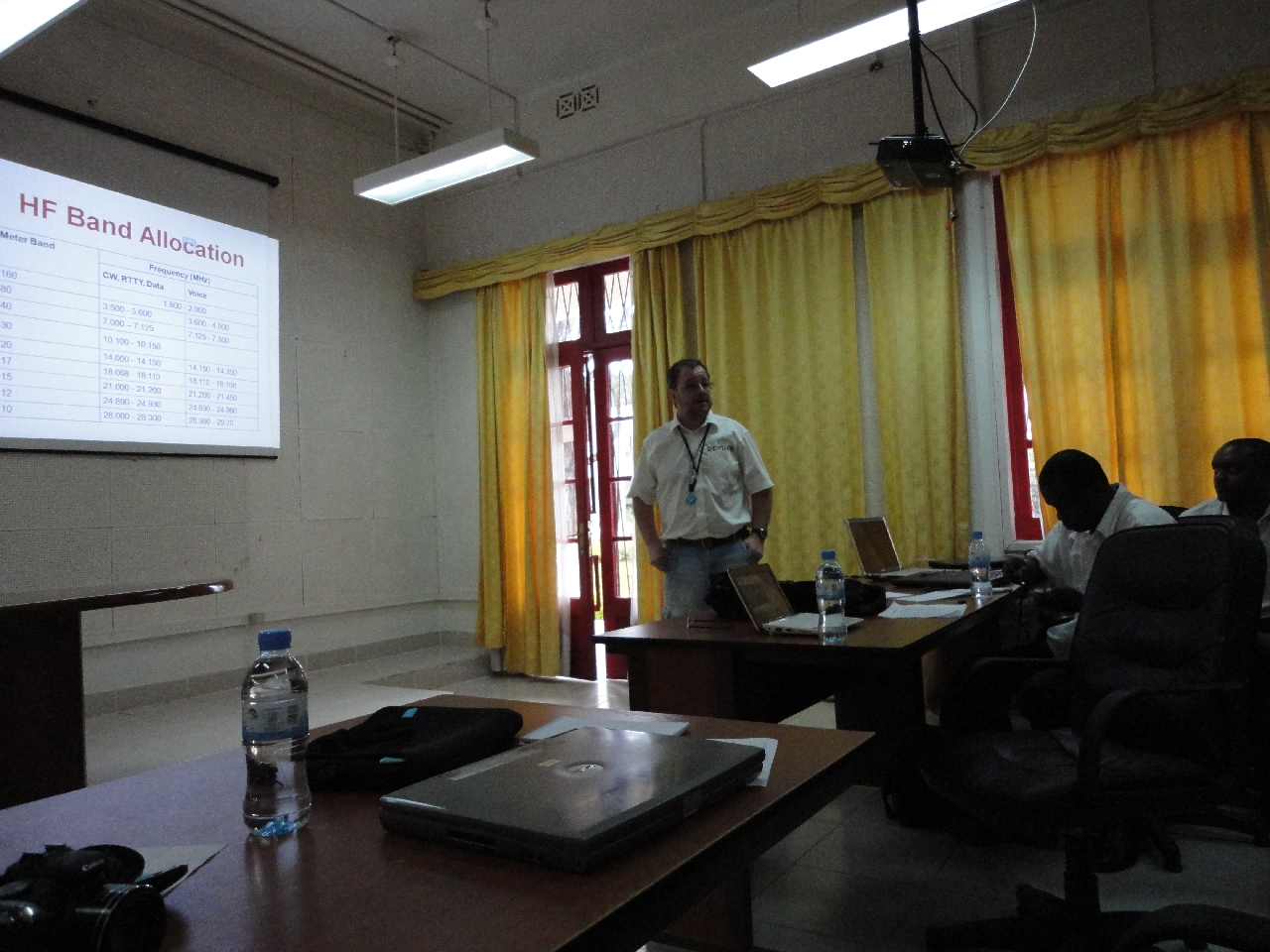 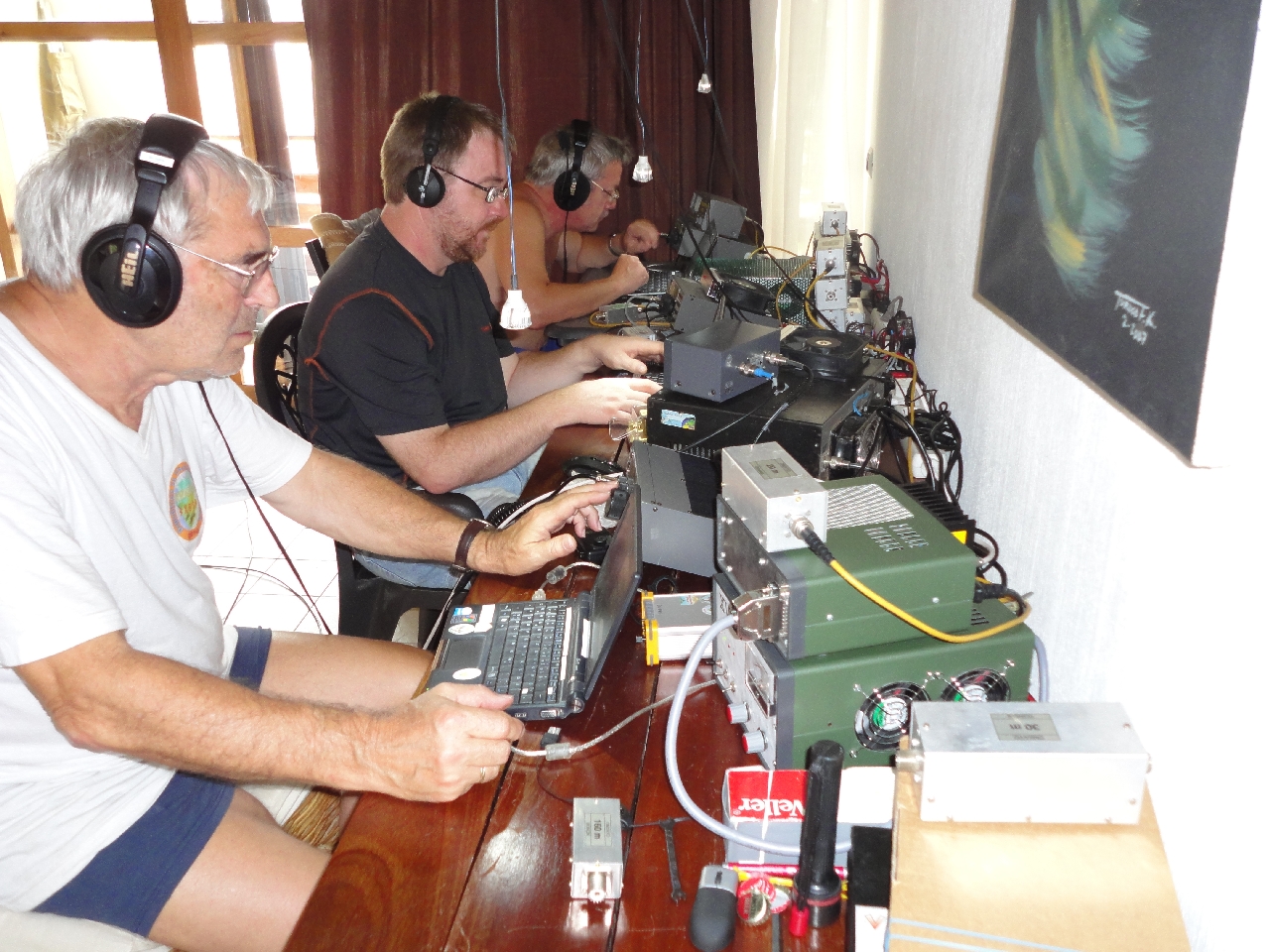 After one week we took off for part two of our DXpedition. For the only 400 km long way from Kigali to Bujumbura we used the airplane. This was done to avoid stressful border controls of our unusual luggage when traveling by car and as a foreigner. The DL7DF crew had already been active from the same hotel Club du Lac Tanganyika in 2007. Because of a delayed checkout in Kigali we arrived late in the evening at Bujumbura and could not get the desired rooms this evening. It was already quite dark and it was impossible to even think about building up antennas. That cost us a further night and we could not get new rooms and start building up the antennas and the stations before the next morning. Behind the bungalow complex towards the shore of Lac Tangayika, which is only 200 m away, we had plenty of space for many antennas. Trees that had been planted three years ago had already grown to a height of 6 m, but did not yet disturbe our antennas. The hotel was also equipped with Wi-Fi. This helped us to attract attention on us by the DX-cluster.

As the rooms had air condition and refrigerators, we immediately felt safe and comfortable. Buffet breakfast, food supply and service were at European standard both in Kigali and in Burundi. We knew from previous trips to Africa that we could delight the staff with chocolate bars. With the temperatures I was very pleased. Thanks to the altitude it was pleasantly warm around 25 degrees at the pool in the evening and not much less than at noon, when temperatures reached up to 32 degrees; sunshine was not bright throughout, but also overcast at times with occasional short thunderstorms. 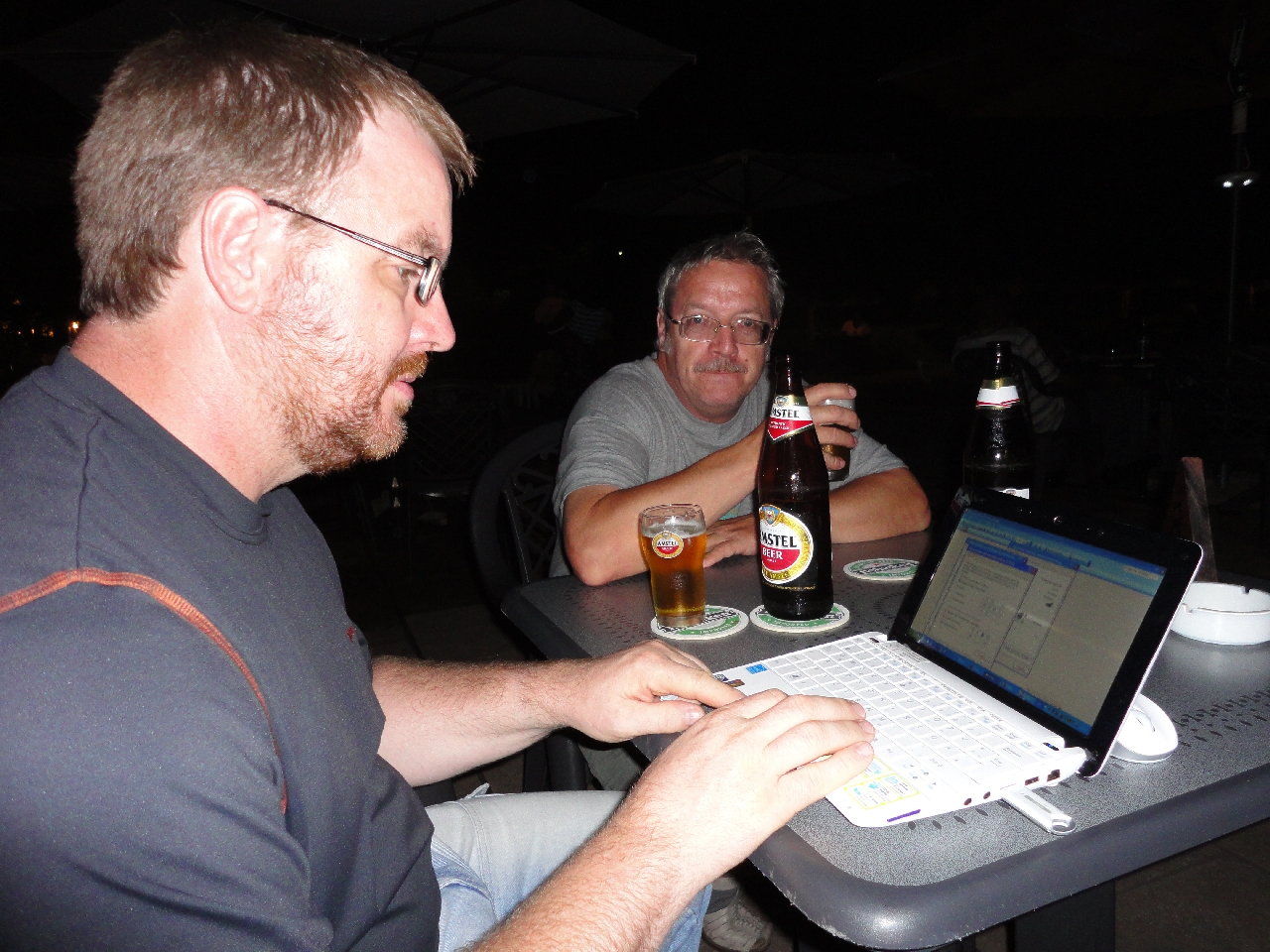 Already before the DXpedition Sigi and Frank had good contact to the RURA the RURA asked for assistance in the establishment of amateur radio in Rwanda. Presentations were planned at the National University of Rwanda in Butare and at the Tumba college of Technology. Together with Francis Ngabo 9X1NF – Director of ICT Scarce Resources – Rwanda Utilities Regulatory Agency (Rura) – Sigi and Frank drove to the campus of the National University of Rwanda in Butare, which is 140 km south of Bujumbura. Francis, Sigi and Frank were welcomed by Dean Professor Dawoud Shenouda Dawoud at the faculty of Applied Sciences. Prof. Dawoud Shenouda Dawoud supports the activities of the RURA at the University of Rwanda. The students are encouraged to learn about the technology of amateur radio and to collect practical experience of propagation conditions. About 40 students listened to presentations by Frank « Fascination Amateur Radio – The Bridge to the World » and Francis « AMATEUR RADIO by Rwanda Amateur Radio Union ». Many questions about participation in the international amateur radio service and its regulation were answered by Francis, Sigi and Frank. The tutorial was repeated at the Tumba College of technology. The Rwanda Utilities Regulatory Agency (RURA) and the Rwanda Amateur Radio Union (RARU) are happy about any support for the development of amateur radio in Rwanda.

Although we were only four radio amateurs, our technical effort was quite high. Our luggage contained three K2 transceivers, two transistor and one tube amplifier. The equipment also included a Spider Beam, a HF9V and several fiberglass rods up to 18 meters. For logging we used 10-inch netbooks with the programs Win-Test (http://www.win-test.com/), MMRTTY and  MVARY (http://mmhamsoft.amateur-radio.ca/) installed. I was a bit sceptical because of the small screen size, but it works fine. For 6 m we had a 5-element Yagi on a separate mast and an IC7000. All in all a very powerful equipment with an emphasis on low weight. It was a bit frustrating in the beginning at the station in Rwanda, when you listen to 80 m at a good antenna (1/4 Lambda GP) during sunset but cannot hear any single station in the CW section of the 80 m band! On 160 m an inverted L antenna at the 18 m glasfiber rods with elevated radials was used. We checked the top band every night and often called CQ. We were well aware of the particular interest in the lowbands, but it was not easy to accomodate the demand. However, of course, near the equator the medium bands also fully open at night, hardly expected by a DL. In addition, 10 m and 12 m did not offer propper permanent openings. During the day, especially around noon not much was possible on the bands and QSO rates slumped. Perfectly well were the conditions on many bands about three hours before sunset and through the first half of the night. 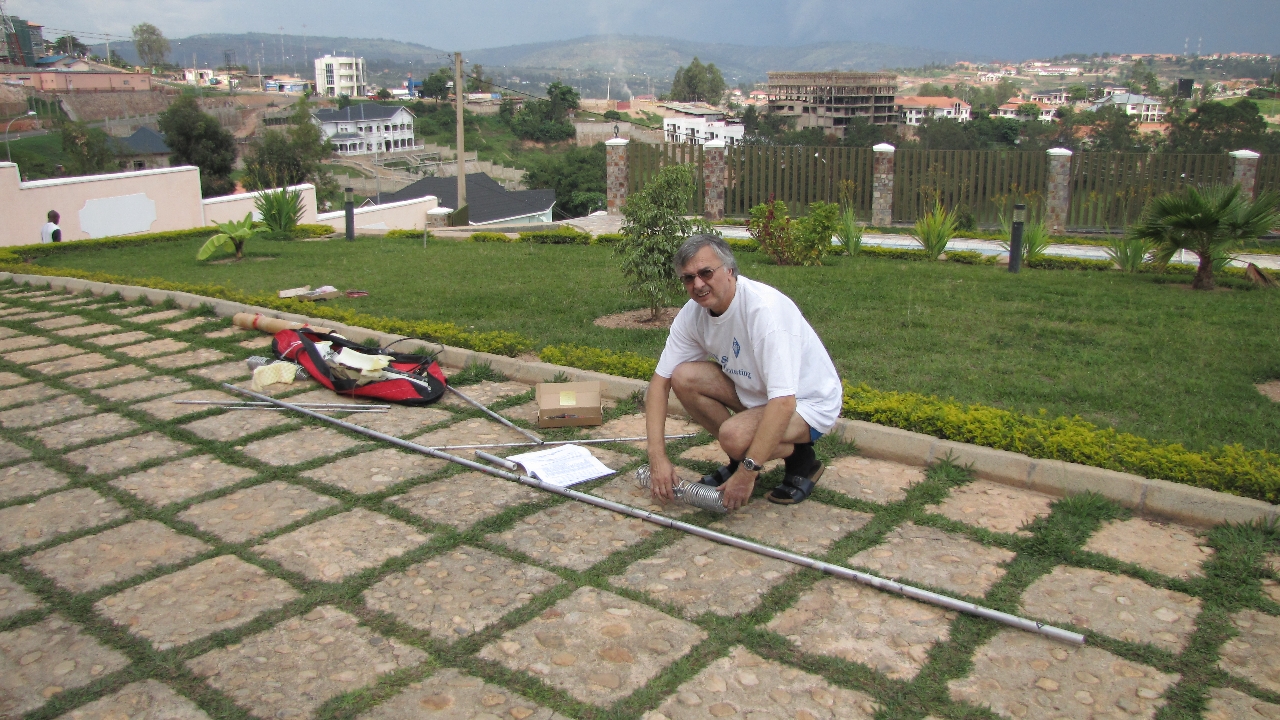 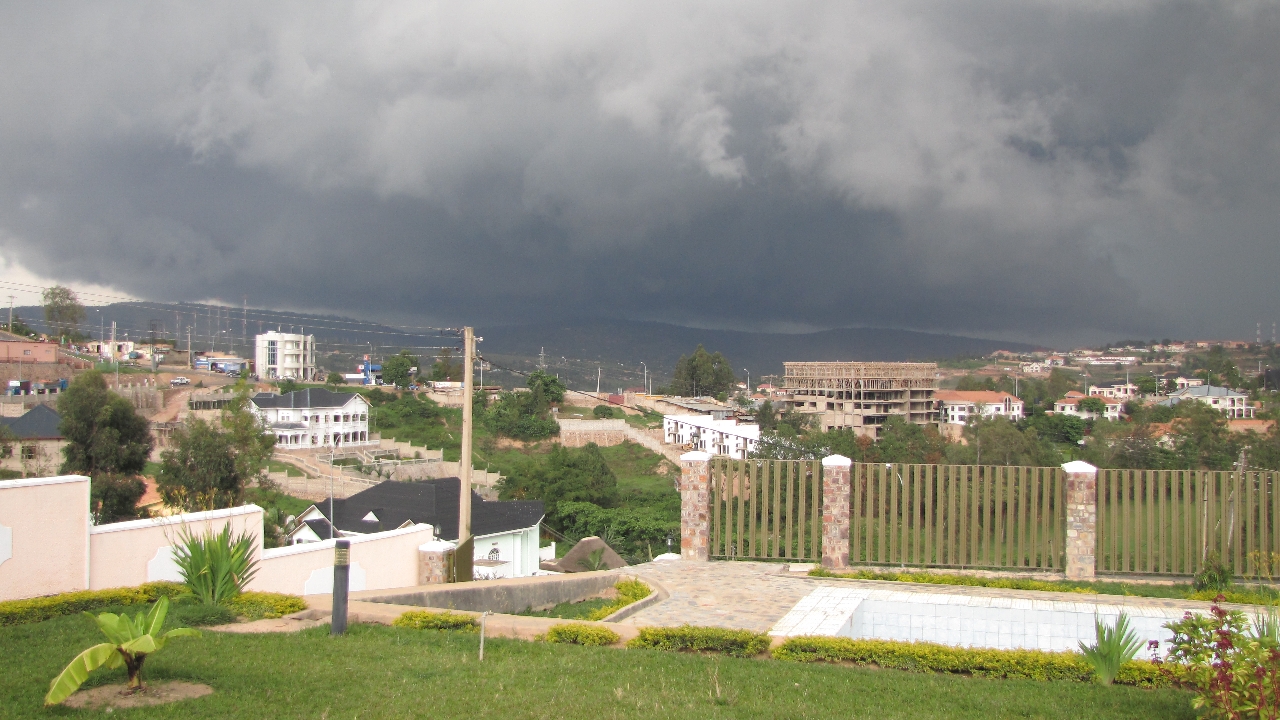 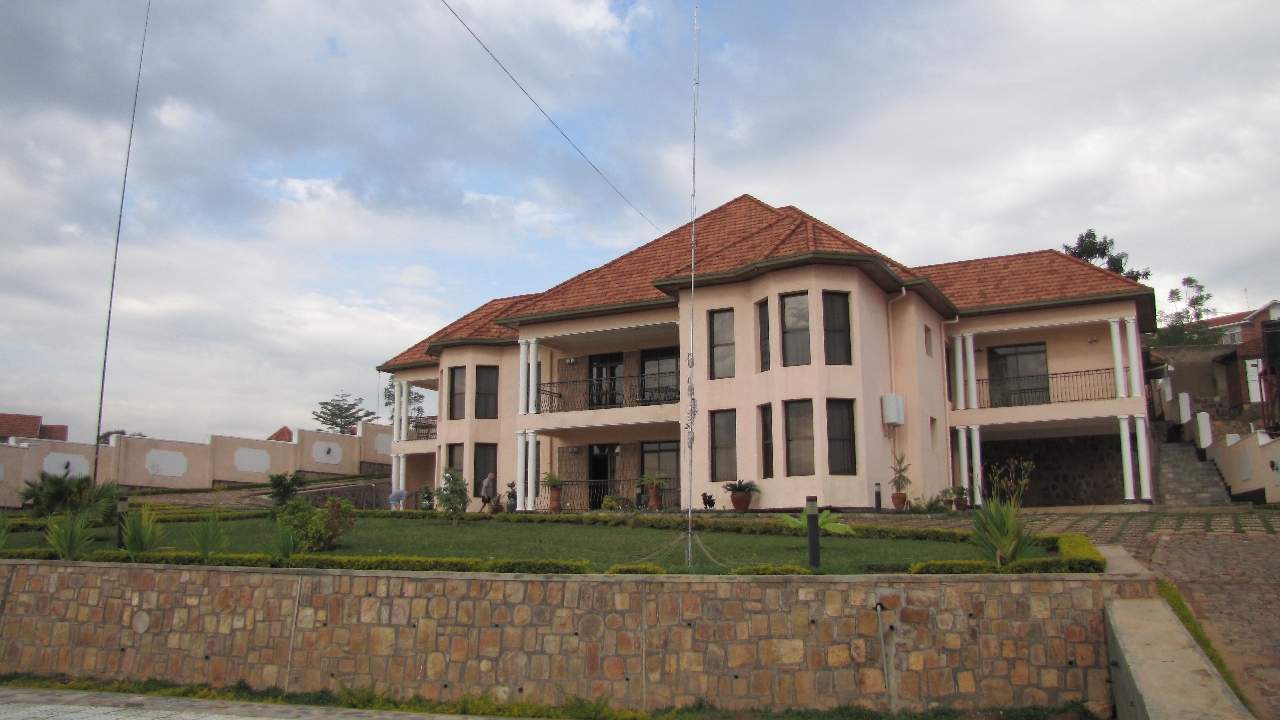 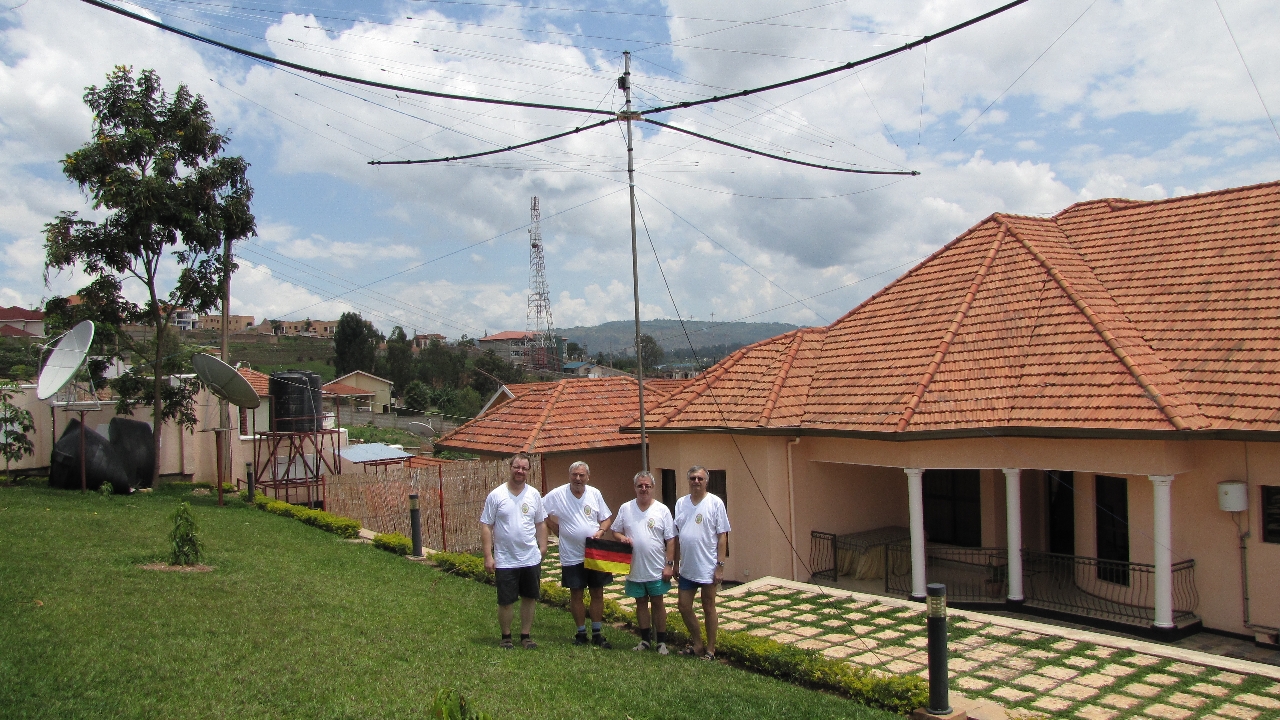 The spider beam was clearly superior to the multi-band vertical. But at a point with single-band quad elements on a glass fiber tower could generate good pile ups. We did not suffer any technical failures, apart from the power interruptions, that was beyond our control. The voltage in both countries was within the normal range. The transistor amplifier worked safe with about 600 watts power output. We had band pass filters for all bands by DM2AYO. They were always inserted between the transceiver and the power amplifier. This also ensured that no two stations could work on the same band. We did not encounter any disturbances by the parallel operation of three stations with amplifiers. Only the unsuccessful 6-m-CQ calls interfered significantly with all other short wave operation. Thanks to the space available, the antennas were usually 20 m apart from one another. In addition, we made sure that adjacent antennas had different polarization where possible and that antennas for adjacent bands were as far apart as feasible. A little problem was operating SSB next to the CW station. Loud talking disturbs acoustically the concentration of the CW operator when picking out quiet CW-signals.

With almost 22 000 QSOs in about 11 days of net radio time we are quite happy and satisfied. The large amateur radio centers Europe, Asia and North America are at least 6000 km away and there are only few stations from Africa. Despite good antennas and daily presence regrettaly the overall figures for the lowbands remained moderate. Also, the interaction in the team was comradely and democratic. The flights with Ethopian Airlines and two hotelsproved to be well choosen.

The question remains: Where will we go next?