At the beginning of July 2010 I did not have any plan to visit São Tomé whatsoever. However, a few days later, after an email from Hartmut (DM5TI), this had changed. He invited me to join his team for a DXpedition to São Tomé in February 2011. I happily agreed immediately! This completed a team of eight radio amateurs and one YL ranging from 21 to 71 in age, from rookie to top DXer, of various walks of life and from different places in Germany. Initially some but not all knew one another in person. There is currently no active resident radio amateur in São Tomé. S9 was within the top 100 on most wanted lists in RTTY only. We reckoned 30,000 QSOs might be an attainable goal for our expedition. Only little more than half a year was left for all preparations. All of you who ever engaged in preparing a dx-expedition knows there is in fact quite a lot to do. 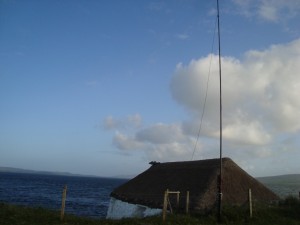 In writing this piece, I knew well in advance that it would be long and needed a starting point; so let’s begin on June 13, 2011. That morning I arrived in Benbecula, Outer Hebrides three full days in advance of MSØINT beginning activities. Lots of things needed done before the team assembled, namely collecting a mountain of gear stored at the local community hall in Berneray isle, filling petrol containers, getting familiar with the roads (and passing places) all over the Uists. Speaking of roads, to say the 16 seat hire bus we had was antiquated is an understatement, although in fairness, it did get us to all intented destinations – with gear stored at the back end of the bus, we did look like a group of New Age travellers! 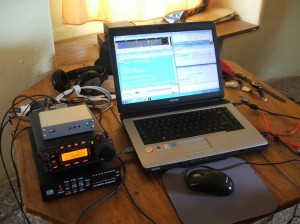 Father and daughter dxpedition in Ghana

As we really enjoyed our last mini-dxpedition to Morokulien, we decided in the autumn of 2010 to undertake another dxpedition 2011, but a more exclusive one. The basis was that it would have to be done with minimal equipment. So, no expensive transceivers, linears, generators and huge antennas.. Also, it was a demand that everything would have to fit into a suitcase without overweight. Soon Ghana was in sight. A group of Italian radio amateurs activated Ghana a few years before and helped us with some required information. Then we split up the tasks within the team, Lisa PA2LS took care of the license request, booking accommodation, sponsoring and website, Kees PE1KL took care of the technical part and booking of flight-tickets, and prepared things like vaccinations and visa. While googling we found that KLM would offer us the best flight. We could take 46 kg of luggage per person and also the direct flight was an advantage for us. With this, the chance we could lose luggage during travelling was reduced to the minimum. 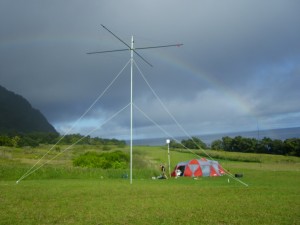 There’s always the same question being raised after every successful DXpedition: what will be the destination for the next trip? The Bavarian Contest Club team led by Chris, DL1MGB, had already carried out two expeditions that turned out well: first, Norfolk Island was activated using the call sign VK9DNX, followed by VK9DWX from Willis Island. For 2010, it took long discussions and lots of research until a new target was found: the team would go to the Kermadec Islands in the southwest Pacific. Apart from a few smaller activities, there had only been two major expeditions to this remote island group in recent years: a group from New Zealand, led by ZL2HU, made about 34,000 contacts in May 1996, and the international “Microlite Penguins” team achieved more than 40,000 QSOs in October 2006. In 2009, the “DX Magazine” ranked Kermadec  number 28 on the list of most wanted DXCC entities. The demand for ZL8 contacts among the DX community was undoubtedly high. But first of all, lots of logistical and organizational questions would have to be cleared up.

The Kermadec Islands are situated about 600 miles northeast of New Zealand and consist of four larger islands as well as a number of barren rocks. There is no native population. Raoul Island, which was inhabited by Polynesian people in the 14th century, is the location of a permanently occupied meteorological station. Obviously, this would be the only place for us to set up our stations. All the previous expeditions had also operated from Raoul.