By June 14th, Vincent F4BKV arrived in Benbecula, fresh from his mini GM-IOTA tour (EU012, EU009, EU123) which would coincide with joining team MSØINT. Immediately upon arrival, he and I set off to South Uist island (EU-010) and activated from a superb spot with the sea almost under us. 200+ QSO’s were quickly made from here before heading to North Uist and finally ending the days activity as MM0NDX/P & MM/F4BKV from our base on Berneray isle. 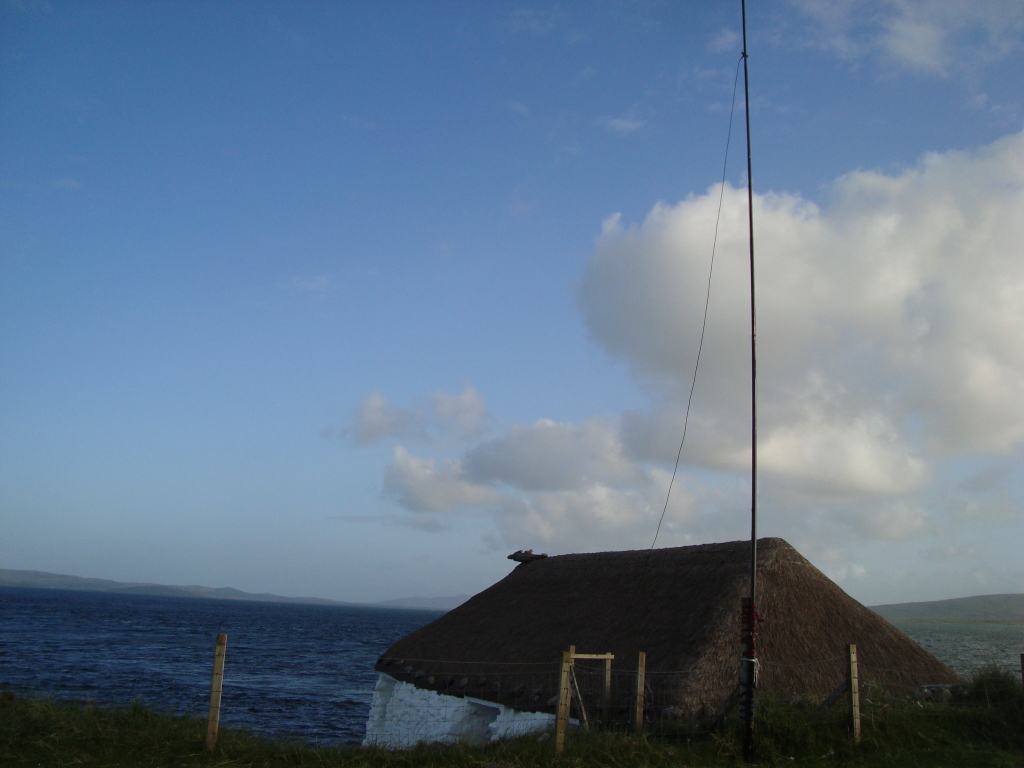 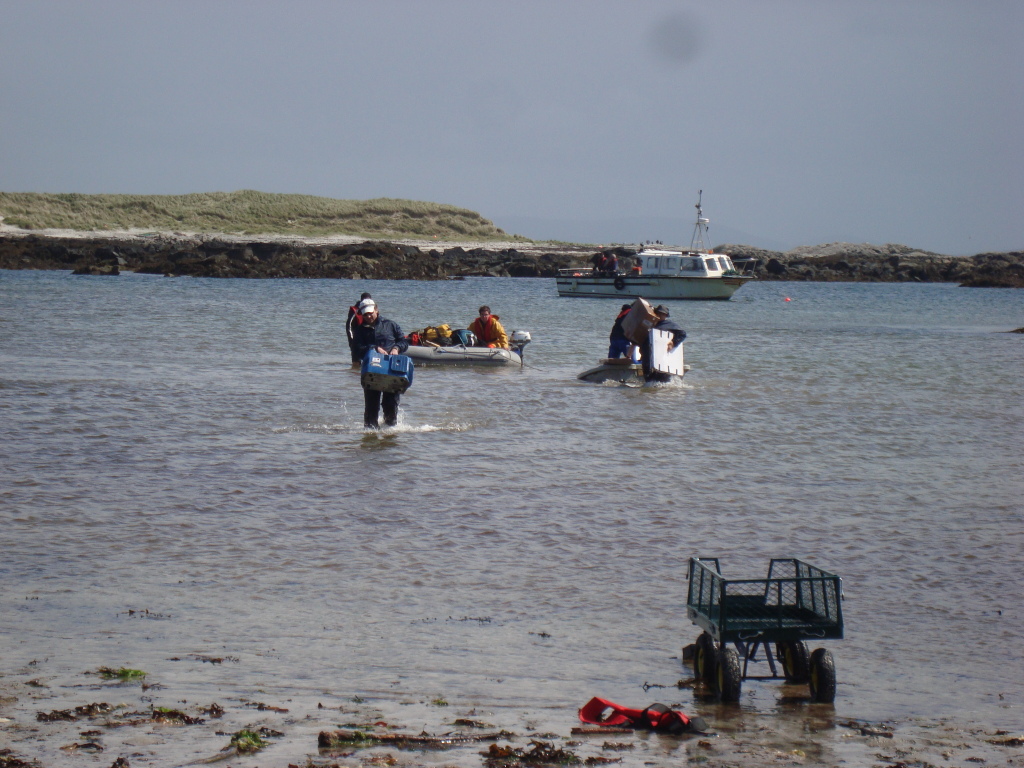 Vincent briefly activated Isle of Benbecula on Wednesday June 15th as we waited on the plane arriving with the rest of the team. Simon IZ7ATN and his XYL Monica were to arrive later that day, so after meeting and greeting, EA3NT, EA3OR,EA5KA, EI6DX, F4BKV and MM0NDX all set off toBaleshare, (EU010) where various MM/ home callsigns were used. Although part of the vast EU-010 group, Baleshare as a seperate island, has not been activated often. The CW pileup especially reflected this. Later that day, we returned to the airport and collected Simon & Monica. Next stop was the supermarket where we’d individually stock up on groceries for the upcomingEU111 and EU059 activations. MM/IZ7ATN and MM/EI6DX were both active that evening from the hostel on Berneray isle, our base before departing for Monachs the following day.

The vessel to Monachs (EU111) was Lady Anne, a converted fishing boat. Nick, the skipper, was the man to take us to EU111. This particular voyage was rough as we fought against a spring tide, 5m swell and exposed sandbanks. In talking to Nick, he confirmed that was one of the worst passages he had ever done. Sick bags testified to that! After 90 mins at sea, the Monachs, and the Old Schoolhouse there, came into view. Thankfully, the bay where we landed was sheltered from a roaring Atlantic.

Unloading all our equipment, food and personal items was time consuming. Indeed, one of the two tenders used to ferry our gear to the beach started to capsize with Ramon EA3OR in it, primarily due to the skipper over-loading and the crewman’s inexperience in rowing ashore. A near disaster with the generator and radios was averted as the tender slowly sunk. Four of us rushed out knee deep to retrieve these important items before the sea swallowed them! Once everything was transported to the beach, and with the weather being glorious, we decided to quickly erect an HF antenna and get on air. Simon IZ7ATN started on 10m as MSØINT/P, then onto 20m. Pileups were good and steady. The plan was to base ourselves at the same QTH as GS3PYE/P had done one year prior. This we did, but no way would we sleep in the old schoolhouse such was the utterly ridiculous state it had been left in by passing fishermen. Tents outside, stations inside. We operated 20 and 40m from EU111. Generator issues caused huge problems for the team and, in hindsight, we did extremely well to make over 2000 QSO’s from here in under 18 hours. One of the sponsored IC7000’s also had a display problem, fortunately back up rigs were taken. We were scheduled to leave Monachs at 0900 local next day. 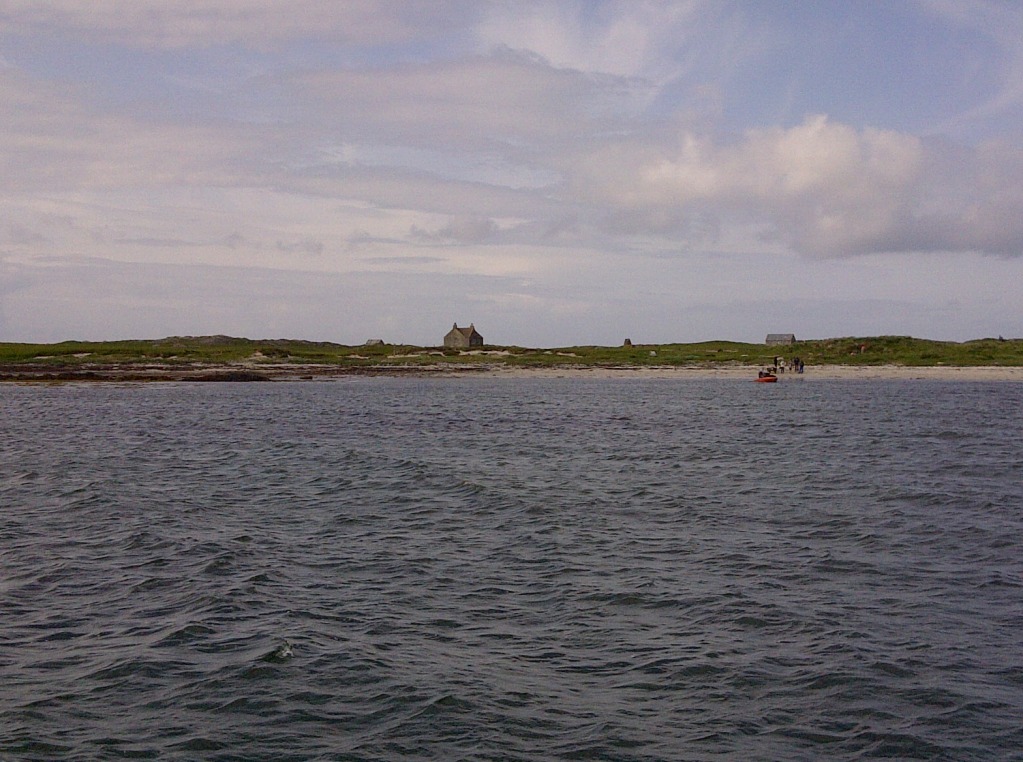 On Friday, June 17th, Seaumas Morrison of Sea Harris boat charters collected us on the Enchanted Isle, a 42ft Interceptor vessel. Let’s be charitable and say the difference between landingMonachs to leaving was like night and day, such was the smoothness of Seumas’ operation. Hundreds of curious seals watched our every movement as we departed the scene – wonderful moments captured by the offical team photographer, Monica.

From EU111 to EU059 takes just under three hours at a steady 18kts. The weather was fantastic to St Kilda , but changed rapidly as we approached the magnificent sea stacs and the towering Boreray (3km north of Hirta, the main island in the chain). Squally showers pounded the sea as we landed in a south easterly wind; the « worst kind » of wind direction for a Hirta landing we were told. Nevertheless, we landed quickly, in heavy rain, with all gear intact and on the pier ready for transportation some 250m above. It is at this point, I can’t thank enough the people involved in permitting us to 1) operate at height from Hirta, 2) assist in transporting all kit to the top – you know who you are!

At 250m above Village Bay, the view is spectacular, but only on a good, clear day. We all gathered together in a howling wind and rain, probably all thinking the same: « Why do we do these IOTA »? Team morale comes to the fore in these situations, and it was high. Pitching tents, to keep items dry, was a challenge. Hats off (literally) to Raul EA5KA and Ramon EA3OR in quickly erecting the first tent, weighted down by luggage just to keep it in place. The large tunnel tent, to be used as the operating shack, with room for eight people, proved extremely difficult to erect on the plateau of Mullach Sgar. Initially, we attempted to pitch it on a field deemed suitable by NTS, but this was an accident waiting to happen. Had we not decided to move the tent behind the outbuilding of the now seemingly disused Ministry of Defence second radar base, I firmly believe it would have flown. Indeed, my own tent, when pitching, did just this! Thankfully, Simon and Monica brought a spare tent! 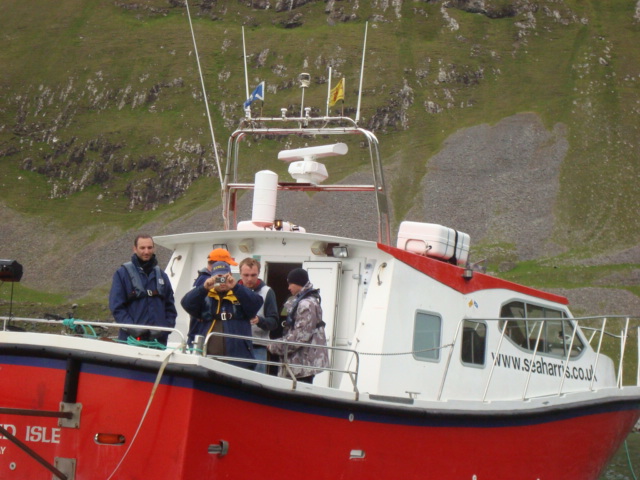 Once the shack tent was finally erected and secured, we got to work in setting up stations, antennas and our own sleeping tents. In a move to surprise IOTA chasers, we decided to open proceedings on 30m CW, and not the usual 14260 IOTA freq. Christain EA3NT started up from EU059. Axel, DL6KVA was first in the log. After a few CQ’s, it was apparent MSØINTappeared on the Dx cluster and the fun then commenced. Soon 17, 20 and 30m were all on air. It should be pointed out that although the tent appeared to be sheltered a little, it was still very much « bouncing » in the cold south easterly gale – it was difficult operating conditions in more ways than one. Working throughout the night, +1000 QSO’s were quickly attained.

Saturday, June 18th was a truly beautiful day. Sunny, warm, clear. We were informed by island staff to be on the look-out for blue whales in the ocean below. Operations continued with very many contacts being logged. JA were being easily worked on 17 & 20m. Outwith Rockall EU-189, we knew Japanese IOTA chasers needed St Kilda next on their most wanted list. It was very pleasing to see so many calls enter the logs. Additionally, NA/SA chasers were being worked with great aplomb – if heard, you were worked. The 40 and 80m vertical was installed in the afternoon, same with the 6m yagi. On 50Mhz, mainly south EU was logged – conditions never good enough to contact more from this rare counter. An excellent run to NA/SA ensued on 20m that evening. Reference must be made to the fact our main generator, similar to on Monachs, stopped working. Thankfully, our back-up generator performed admirably.

Suddenly, and with no warning, the weather changed rapidly – again the wind picked up, like a carbon copy of the previous night. It was a relentless bombardment, captured on video for posterity! How the shack tent survived, we’ll never know. A few snapped poles inside confirmed the wind was more than strong. The 30m vertical was downed – large rocks used in tying antenna ropes were being tossed to one side, and this was a summer gale! I can only imagine the severe winter storms battering St Kilda. Despite the often adverse weather, we continued at a good rate working the world. EU059 was becoming less wanted for many – the real reason behind this IOTA expedition. During the peak of operations three HF stations and 6m were on air. 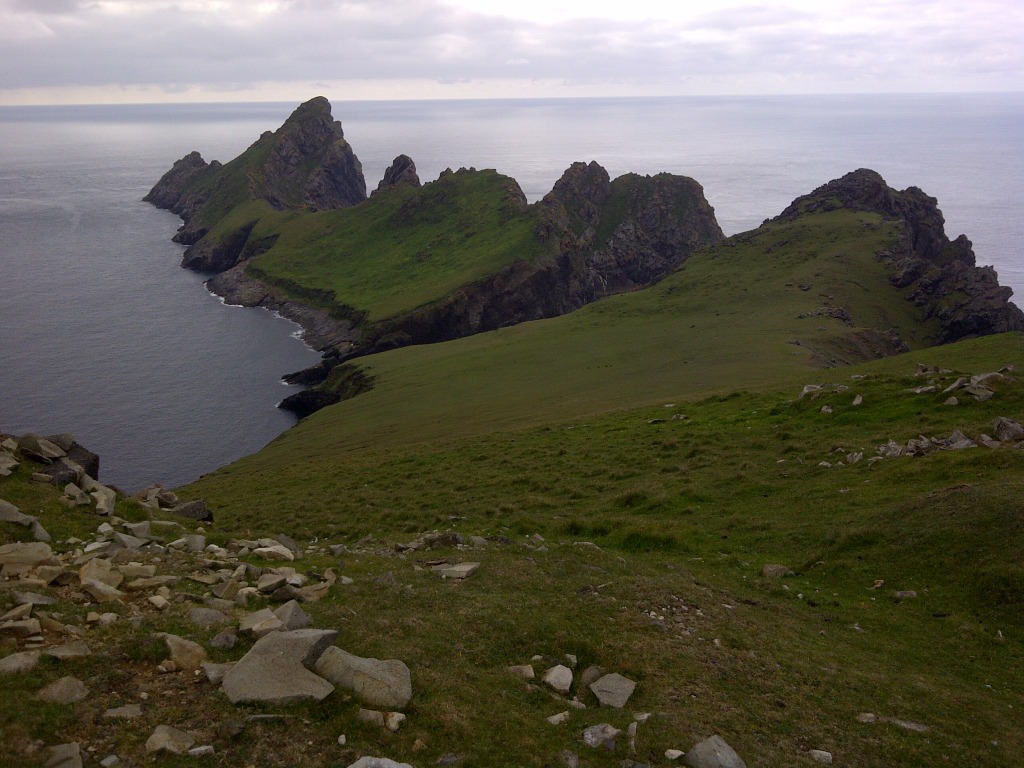 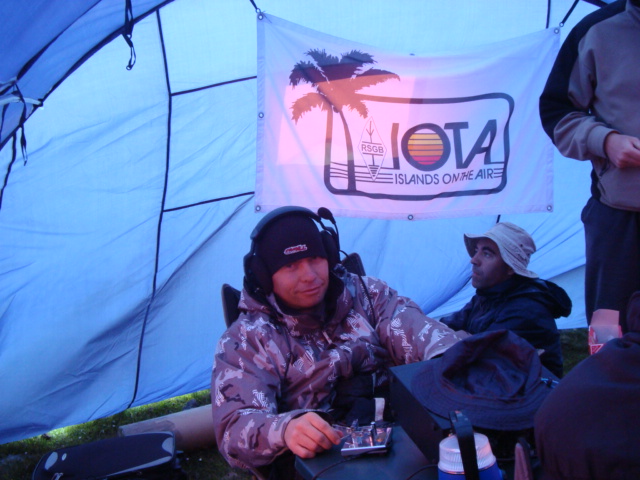 The scenery and wildlife on Hirta, St Kilda confirms why the archipelago is only one of 25 UNESCO listed locations around the world for natural beauty and heritage. Lord Howe island, including Balls Pyramid, to put in context, is one of the other listed locations. Monica took some memorable photos for sure. The QSL card depicts her work.

Sunday, June 19th. With thousands of QSO’s already in the log, we continue hard to work all stations calling us. Propagation was mixed; not poor, not great is one way of describing it. However, this was the one day the wind didn’t arrive – and very grateful we were too! 40 & 80m was prime focus during the evening, with 20 & 17 also going well. PSK31, like the previous day, was also in use by Vincent F4BKV. We had plans to tear down the station gradually during Sunday as we had to leave the island by 0900 latest next morning. However, it was decided to keep going right through until daybreak Monday, to maximise the chances of all who called to enter our logbook. 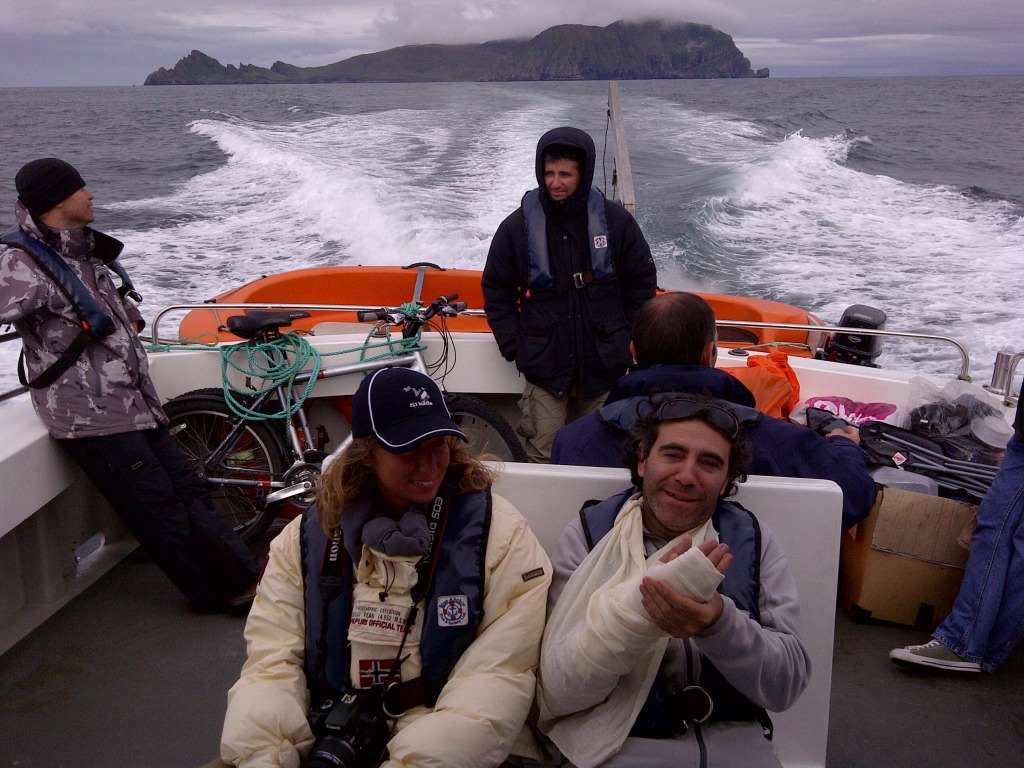 Although the end of transmissions had ceased, we were not without drama as we packed up and descended the steep road back to Village Bay. We had taken two bikes with us. Unfortunately, Ramon EA3OR fell off one of the bikes on the way down and sustained an injury. It wasn’t until the expedition was over, it transpired he had broken his hand. With also nearly capsizing in the tender at Monachs, you could say Ramon had an eventful journey!

There is only one logical target for MSØINT next year subject to substantial fund raising, and weather/sea conditions permitting. It’s a little further west than Hirta, St Kilda. I’m sure you can guess where our thoughts have turned to!

With many thanks to all sponsors listed on our website in making this expedition happen. Special mention to Andrew Ross on Berneray – you’re a star! Thanks too to our webmaster and twitter updater, Niko DD1MAT. 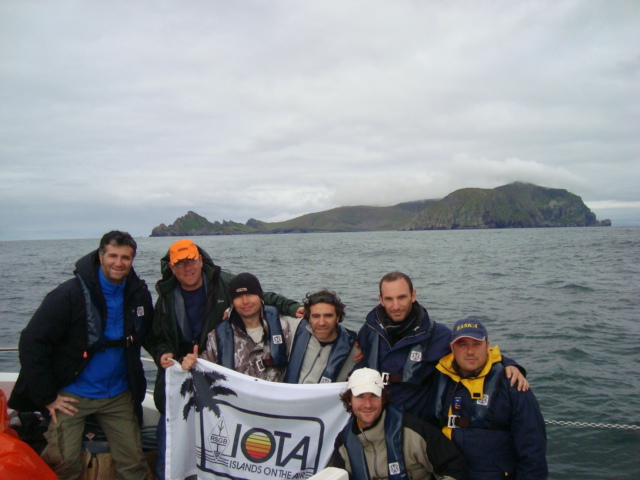