The South Orkney Islands sit at approximately 60 degrees south and 45 degrees west – about 600 km east from the tip of Antarctica, and 1500 km southwest from the tip of South America.  Though the islands have an English name, and are commonly known by a VP8 prefix, the United Kingdom does not actually own the South Orkneys.  Neither does Argentina, which also operates a base on the islands.   Nobody does.  This is because the South Orkney Islands are classified under “The Antarctic Treaty” which is a United Nations agreement by 47 nations that allows peaceful, scientific and non-military access to the Antarctic region, and freezes all territorial claims below 60 degrees south.  Two other VP8 entities nearby, South Sandwich VP8/s and South Georgia, VP8/g are above 60 degrees south and not subject to the treaty.  Both are sovereign territory of the United Kingdom.

Antarctica is international territory. This means expeditions do not need landing permission or entry visas from one specific nation. They only need to file the appropriate environmental impact applications and operational plans with any of the Antarctic Treaty signatories – usually the expedition’s home country (in our case that was the United States).   This also applies for the three other DXCC entities below 60 degrees:  Peter I, the South Shetland Islands and the Antarctic continent.  Our expedition paperwork was filed by Ralph, K0IR, and approved by the US State Department, The US Environmental Protection Agency, and the National Science Foundation.

Though technically we were a US flagged expedition, for ease of callsign prefix recognition our radio license was issued by the United Kingdom with a callsign VP8ORK.

We chose to land at an island called Signy, which contains a sheltered anchorage and a small British Antarctic Survey base.  The plan would be to set up radio operations on shore, but travel back and forth to the ship between radio shifts.  All life support would be offshore, thus making the logistics slightly more in line with previous Microlite Penguin DXpeditions. 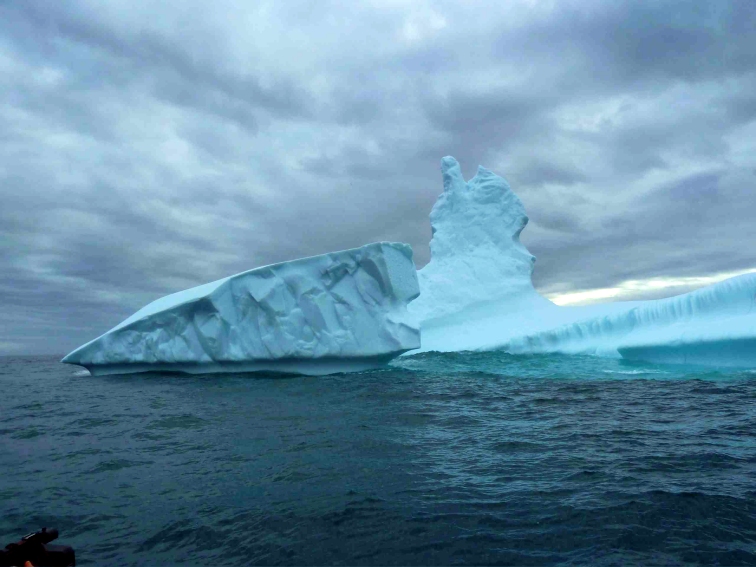 The team assembled in Buenos Aires, Argentina on the 17th of January, 2011 before heading down to the small town of Ushuaia two days later. At 54 degrees latitude, Ushuaia is often referred to as the “end of the world”, as it is the most southern city on Earth.  This makes it an ideal starting point for voyages into Antarctica. Ushuaia has gained a reputation in recent years as the world’s premier Antarctic gateway.  (This status later would prove to a curse for us, as the port fees charged came out to over $34,000 dollars – almost 3 times what we had initially been told!).

Our New Zealand based ship “Braveheart”, which is well-known to DXers all over the world, has over 10 years experience taking DXpeditions into the Antarctic region, so she was the logical choice for this adventure.  Our exact destination was a small island called “Signy” which is part of the South Orkney group.

The body of water between South America and the Antarctic Peninsula is called the “Drake Passage”.  Low-pressure weather patterns from Antarctica and current flows around the Southern Ocean converge at this narrow passage making it the roughest sea anywhere on Earth.  Though we experienced some fairly strong rolls, our crossing toward the South Orkney Islands was mostly smooth and free of storms – a very rare occurrence in this part of the world.

Our only serious problem on the way down was keeping clear of icebergs, which were all around us for the final 12 hours of the journey.  Even with sophisticated marine radar, icebergs are extremely difficult to see – especially at night.  It took the entire crew and even some of the team members to keep a constant watch out for these dangerous pieces of giant ice.

We arrived at the small island of Signy on January 25 – three and a half days after departing Ushuaia.  Our landing site was a place called Waterpipe Beach, located about 2km from the British Antarctic Survey (BAS) base.   This site was chosen about one year prior to our arrival based on discussions with the British officials who were very supportive towards our operation.   Waterpipe Beach was not a perfect location for all directions, but it provided landing access for our Zodiacs, and some wide open areas to erect antennas.  Our directions were totally clear except towards of North America.

Landing on this little island is not easy.  The beach is full of fur seals and slightly too shallow for easy access by small boat. The only reasonable alternative we found was a set of large rocks at the base of the nearby cliffs, which could act as a natural jetty for our zodiacs. Climbing on and off was very tricky, as we had to jump onto slippery surfaces and then pull ourselves along the side of the cliff with ropes.  (Eventually the crew of the Braveheart constructed a wooden ladder system directly up the rock face, which made access much easier!)

Our campsite consisted of two large tents – one for radio operations and another for storage, eating and emergency shelter in case we could not return to the ship.   Generators were placed next to our tents, and antennas spread out in a 360 degree circle around the campsite’s centre.  The shelters were polar-grade, heavy duty models – the same as used on 3Y0X and VK0IR – with wood floors, and insulated covers.  These kept us warm, dry and safe from the extreme polar weather. 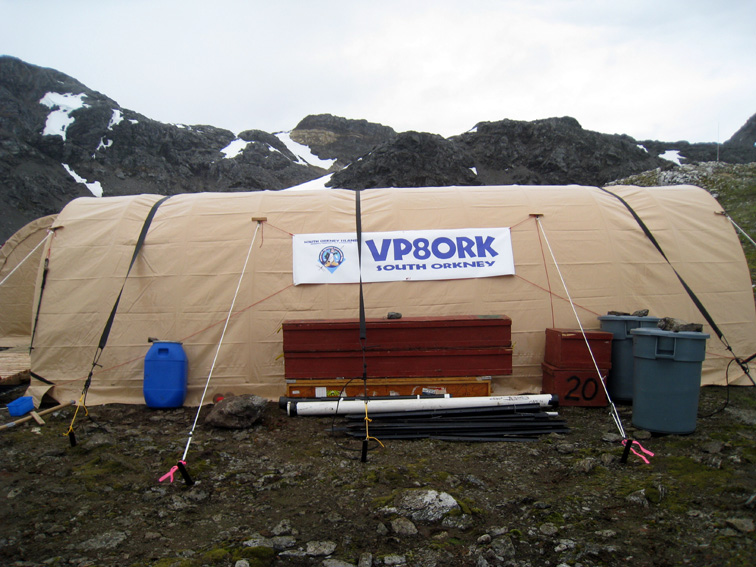 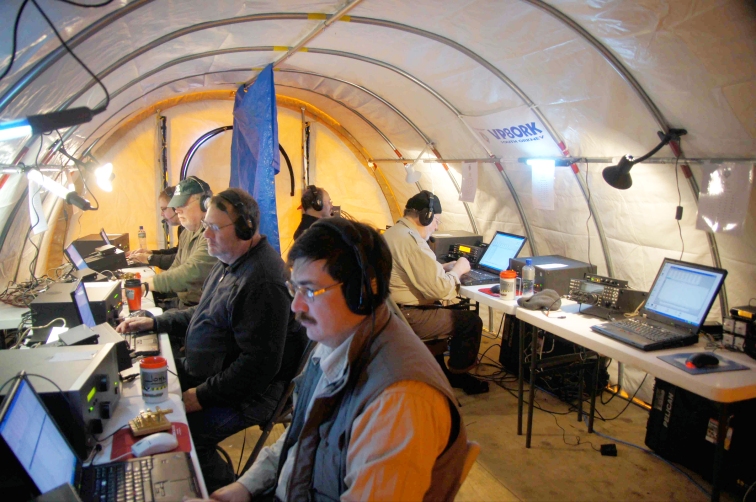 Surrounding the camp in all directions were hundreds of Antarctic Fur Seals.  These animals are normally very aggressive, and can be extremely dangerous to humans.  One small bite can cause severe infection.  But for the most part they had enough space to themselves and we faced no difficulties in clearing our campsite and pathway back and forth to the landing zone.  Other wildlife on Signy Island included Elephant Seals, Chinstrap Penguins and Skua.

VP8ORK consisted of seven stations running 24 hours a day, all equipped with Elecraft K3 transceivers. We also had with us two Acom 1000, and three Acom 1010 amplifiers.  Antennas consisted of DX Engineering ¼ wave verticals for 10m-40m, a full-size 80m vertical on a Spiderbeam mast, and a “Battle Creek Special” vertical for 40, 80 and 160m and a SteppIR Big IR vertical for 75m.

Due to the heavy demand by DXers worldwide, our focus was on the low bands, with a special emphasis on 80 and 160m.  This meant that our traditional “Microlite” approach would have to be scaled back a bit in order to accommodate the larger antennas and heavy amplifiers.

Our group was separated into two teams, and our 24 hour operating cycle was divided into 3 blocks of 8 hours: 4am–12 noon,  12 noon–8pm, and 8pm-4am.  This rotation was followed in an on-off cycle for the entire trip.   The rotation change at sunrise, midday and sunset allowed our support ship to get us on and off the island during daylight. 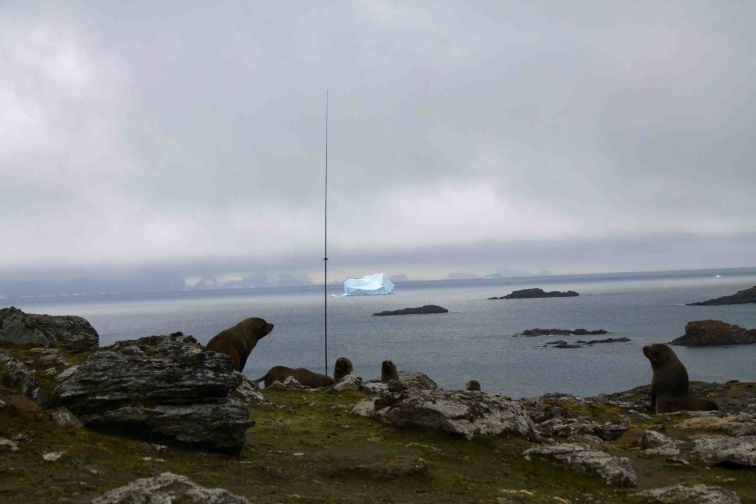 Our prime 160m operators were EY8MM, VE3EJ, WB9Z and K0IR.  These four operators managed to pull in an impressive 1906 QSO’s – more than any other major DXpedition to the Antarctic or sub-Antarctic region.  Our antenna was the well-proven Battle Creek Special – the same antenna used on ZL9CI, VK0IR, 3Y0X, FT5XO and many others.

On the first two nights we noticed that our QSO totals were low and people were not hearing us well. It soon became clear why: seals!  The constant movement of these large animals broke or mangled most of our radials each night and by the morning of day 3 there was almost nothing left.  It took a full afternoon of untangling and adding new wire before we managed to make the antenna work again.  And with the addition of even more radials and hundreds of rocks to hold down the wires, the Battle Creek Special soon turned into an impressive, seal-proof performer. 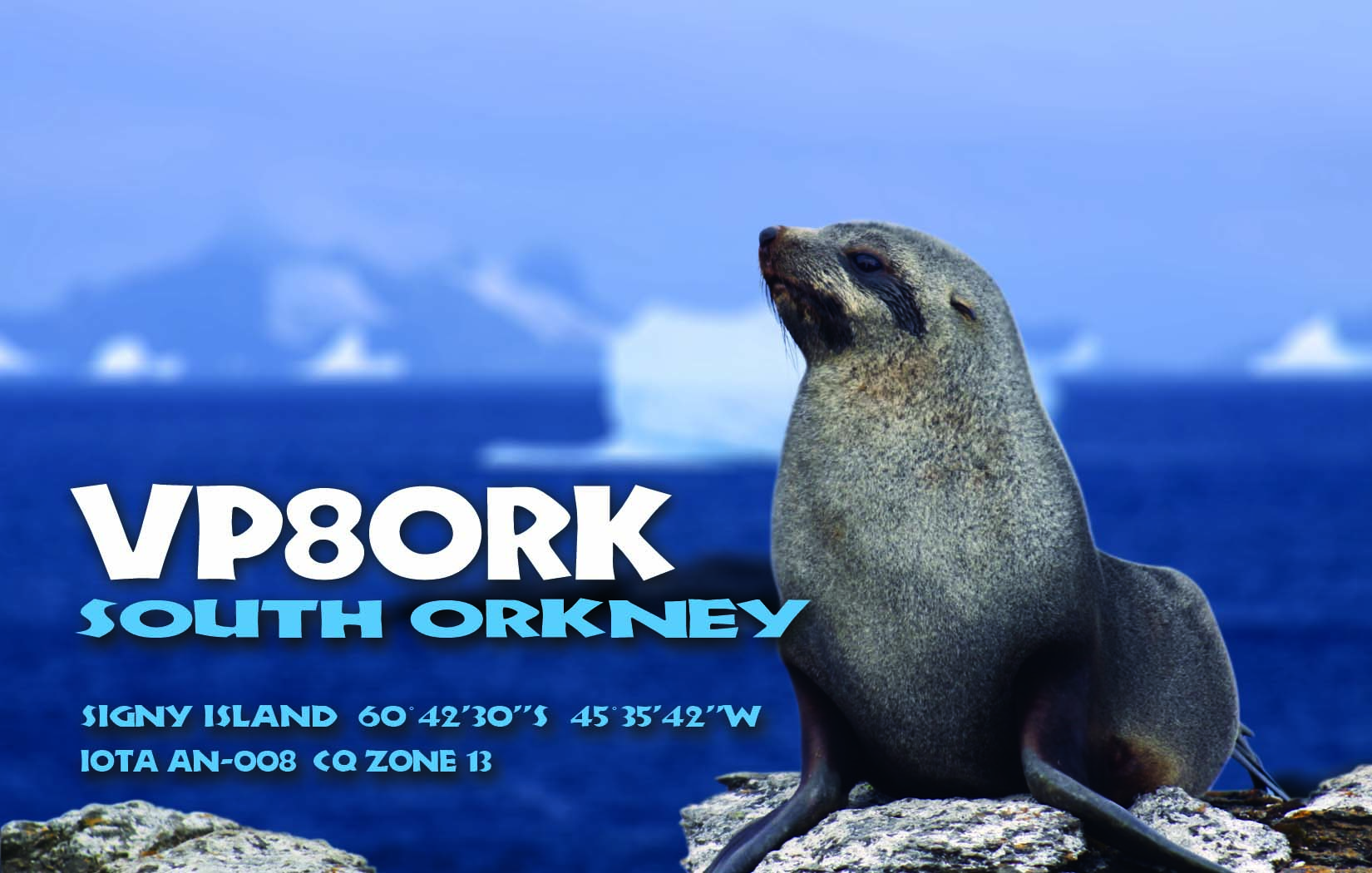 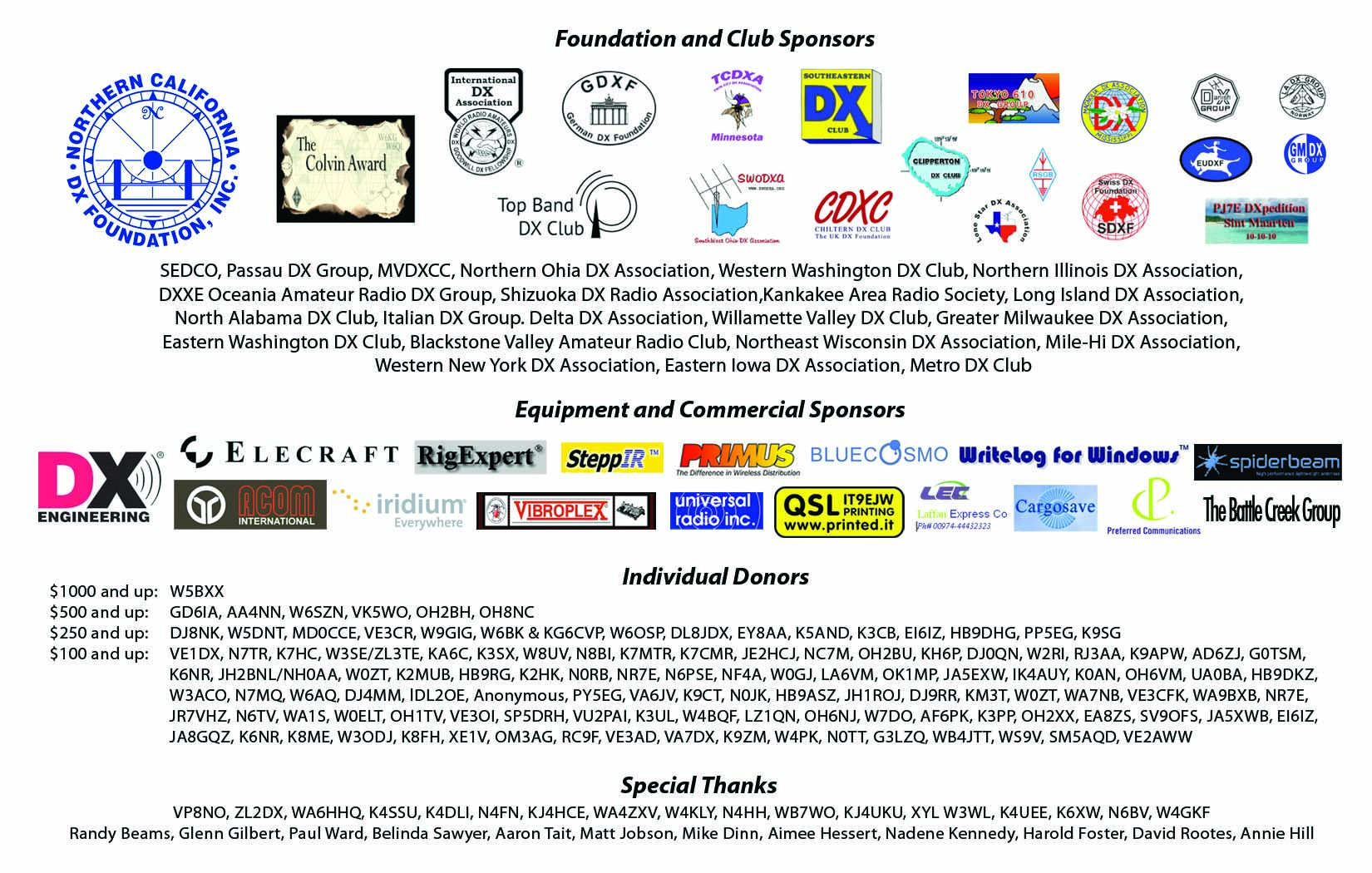 A total of 1,643 QSOs were made with France representing 388 unique callsigns.

The VP8ORK DXpedition was a success in every sense.  We arrived and departed exactly on schedule, we had no bad weather, no injuries, no equipment failures and made more QSO’s (especially on the low-bands) than we ever expected.  In many ways, our experience in Antarctic DXpeditioning was the key factor in our success.

We were very lucky, but luck favours the prepared! 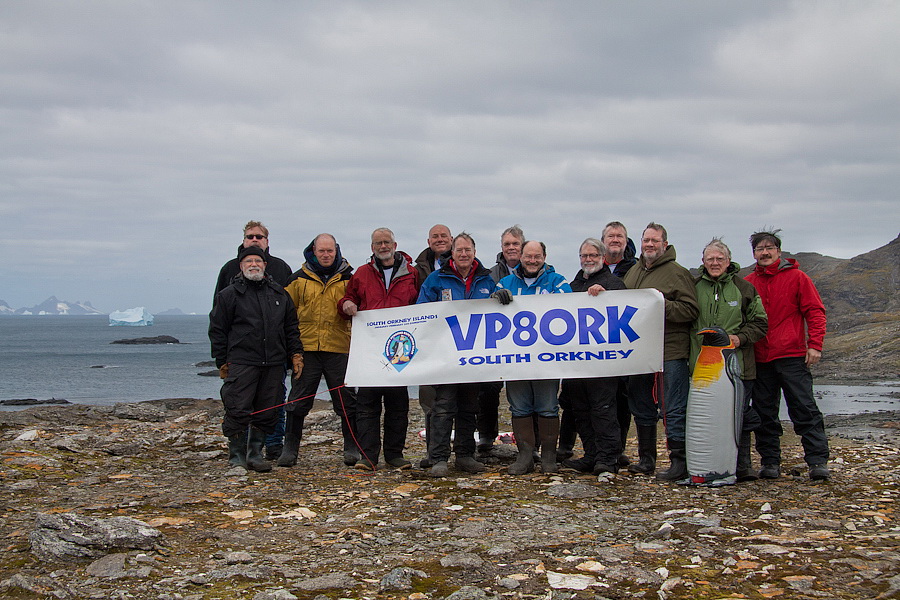 A note about finances

DXpeditions to the extreme ends of the earth cost a fortune, and VP8ORK was no exception.  Our final cost has come out to US$325,000 – far more than we ever anticipated.  Much of this cost overrun was due to the heavy port fees in Argentina and higher fuel costs that directly impacted our shipping expenses and ship charter costs. We are grateful to the many foundations (especially the NCDXF), clubs (thank you Clipperton DX Club) and individuals who have already contributed, we are asking the DX community to please help with more.  Not only does it help our DXpedition, but it keeps the future of polar DXpeditioning alive.

Contributions can be made through our website at www.vp8o.com