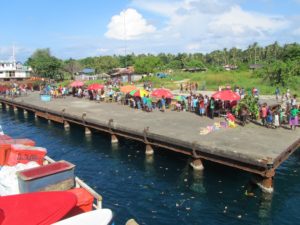 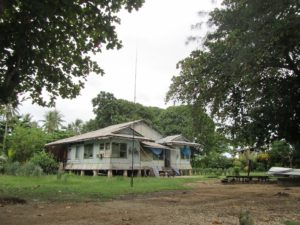 My destination in the Russell group was Yandina, on Mbanika Island, where I travelled along with Bernhard (DL2GAC, H44MS), who graciously provided me with ample logistical support. Once the site of the largest copra producer in the country, the island has lost its economic position following a complex socio-economic and political conflict, which resulted in its complete shut-down 15 years ago. There is currently no electricity, running water, on internet in the group.

I operated from Yandina between April 22 and 25. I started the on the air by using the Icom IC-7000, AL-500M amplifier, and a multi-band vertical wire antenna. Unfortunately, the amplifier failed after just a little over 200 QSOs. Subsequent tests, carried out after my return to North America, confirmed that it overheated. However, once it reached that state, I was never able to return it back to normal during the expedition.

Upon the return to Honiara, I had a short window of opportunity, before my flight to Temotu, to possibly activate the Florida group. Luckily, we were able to find transportation to Tulagi Island, a small island within that group, right after our return from Mbanika, where we arrived well past the sunset. The operation lasted only a day and a half, on April 25 and 26. 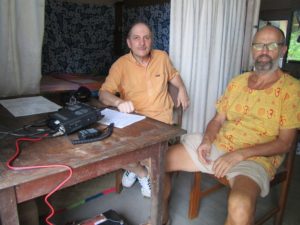 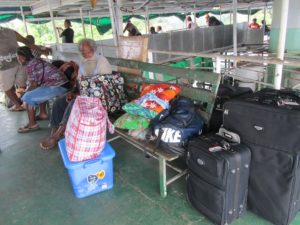 Fig 3. Next to the radio station (with Bernhard).
Fig 4. Abord the boat leaving Mbanika.

I flew from Honiara to Lata, the capital of Temotu, on April 27. Each passenger’s free of charge luggage allowance is limited to 21 kg, of which 16 kg in the cargo and 5 kg in the cabin. Despite storing the amplifier and some clothing in Honiara, my luggage still weighted 47 kg! Without regular transportation to Duff, the only option was to ride a 23 ft open motor canoe. Stanley was my boat driver, as we covered the 175 km in two stages: first evening from Lata to Pigeon Island, where I spent the night, and next day from there to Duff. 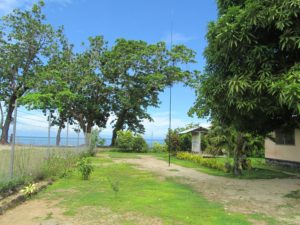 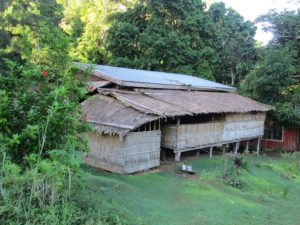 The voyage from Pigeon Island to Tahua Island, in the Duff group took four hours. Chief Abros Miki and many locals welcomed us warmly. The island, which is only 140 x 100 m, is the largest of several man-made islands on the coral reef surrounding Taumako, the largest, volcanic island in the group. All these islands were in place by the time the first Europeans visited the islands a little over 400 years ago.

Since we arrived in the evening, I setup the antenna as quickly as I could, to have it in place before nightfall. The radio operation was carried out between April 28 and May 3 (local hours), using the Icom IC-7000 powered provided by 100 Ah deep cycle batteries, which we charged by a 3.3 kW generator rented from Pigeon Island. 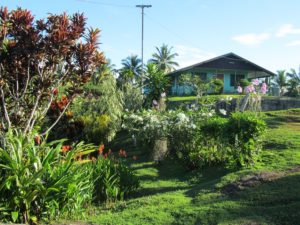 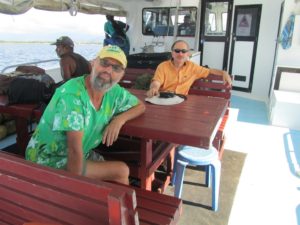 We returned from Tahua to Pigeon on a heavy rainfall, which continued – with short breaks – all night. The flight back to Honiara was rescheduled by the airline a day later, since the airstrip had been completely flooded. The boat ride to Lata was not far from absolute madness. It took twice as long to do it as the forward trip, in a rough ocean, with the motor canoe sliding at times down a big wave, engine first. While this unusual motion made me think of the boat potentially capsizing, Stanley would manage to bring it back on top of the wave by pacing it and accelerating at the right time. 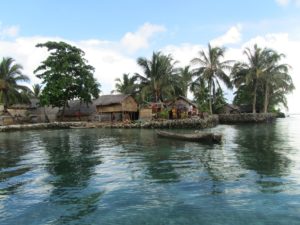 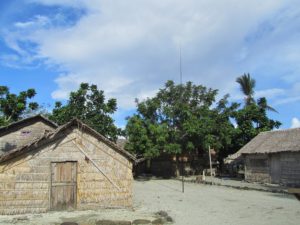 I remain indebted to Bernhard (DL2GAC, H44MS) for his extended logistical support. My thanks to Bill (K9RR) for providing the amplifier, George (VE3GHK) for technical support, Maury (IZ1CRR) for website assistance, and John Mairiri for his hospitality on Mbanika. I wish to acknowledge Ben Hepworth for his close cooperation to ensure the success of my trip to Temotu, and Stanley for his skilled driving. Chief Abros Miki is graciously thanked for facilitating this project and his warm hospitality on Tahua. I presented him upon arrival with a box of medical supplies, as well as other gifts for the local kids, offered on behalf of the amateur radio community. France was #12 DXCC with a total of 38 QSOs. 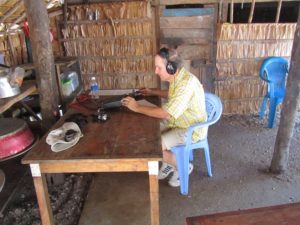 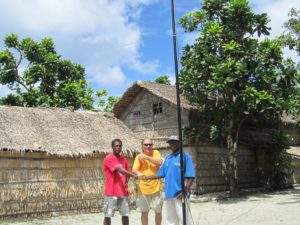 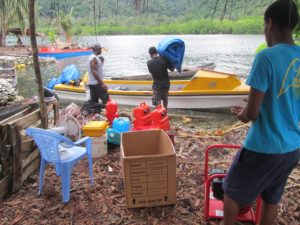 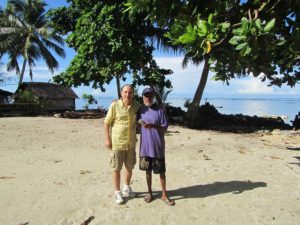 Fig 13. Meeting Thomas Taisea on Taumako Island. He hosted Bernhard on Tahua, 25 years ago.
Fig 14. Preparing the boat for the return to Pigeon Island.