After having been to Macau 2017 (XX9D) it took a while getting an answer on the (for us) always actual question : Where do we go next ? We decided for the Easter Island as the remotest island in the pacific triangle. About 2000 km from Pitcairn and 4000km from the Chilean mainland. Still an island filled with mysteries and theories how the 700 and more huge stone statues might have been transported and erected and how it could happen, that a developed society as it was could decline and fall. 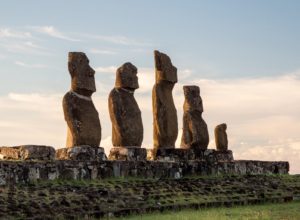 Well, our main interest was to activate the Easter Island and not to add our speculations to those already existing for more than two and a half centuries. Collecting and packing the equipment is a routine after more than ten years on expeditions . We relied upon the material and the experiences of the past, The only new companions were a Pentaplexer and the new designed high-power bandpass-filters.

The new crew was almost the old crew supplemented by two XYLs (of DJ9KH and DL2AWG). 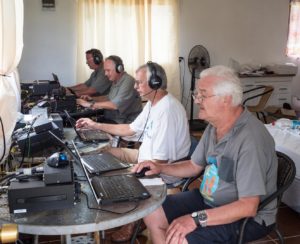 In the very early stage of planning we were in contact with the Radio Club de Chile. They helped us in a great manner with the licenses and the special XR0YD-callsign. DK7ZB and others led us to Miguel, the owner of the Cabanas Honu Nui, a very ham-friendly location with lots of antenna-space behind the self-catering bungalows a few hundred meters from the Pacifis Ocean. There was power enough for at least 4 full-legal-power-stations without  line- or other man-made noise.

So good local conditions what means power, accomodation and  understanding people around. It was a good decision to have Andreas DH8WR as an almost native spanish-speaker in the crew.

Travelleling to the Easter Island was easy going, from Frankfurt via Madrid to Santiago de Chile, where the group picked up the licenses and DJ9KH with his wife, who made  some Chile-excursions before.

Unpacking the luggage, installing the 4 stations (K3 + amplifiers+ filter-cascades) and bringing up the antennas (5-band Spiderbeam, verticals for 160, 80, 40 and 30 m) was completed after 5 hours, and the first 4-hour shift could begin.

We came with lowered expectations what means conditions on the higher bands…. boring day-shifts with white noise from 10 to 17 meters? Nothing like this, conditions turned and we found ourselves in tremendous CW- and SSB-pileups on those bands, even with Europe and Japan. The US-stations were just behind the housedoor. So it was not surprising, that we reached  our first goal (30.000QSOs) 5 days earlier than planned. We ended up with good 46.000 QSOs, whereof  almost 50% were made with North America and remarkable 30% with Europe. 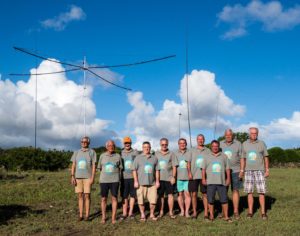 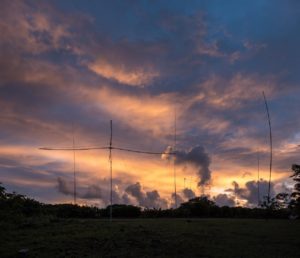 This was the first time we operated FT8 beside RTTY as a digital mode. We did not use the contest-mode, nevertheless we had around 5.000 contacts in that mode. The numbers of FT8-users is growing and it seems me, that FT8 will become a must for dx-peditions in the future. Being an active radio-amateur for more than 50 years my attitudes seem to be a little bit old-fashioned, but I am still thinking twice about FT8 and other digital-modes between the „standard-modes“ SSB and CW…..

Anyway we had a successful expedition with the inevitable faults and technical problems, we’ve learned our lessons and we try to do much better next time. By the way : we were not able to unravel the mystery why 17m was not working on our Spiderbeam…..Easter Island is full of mysteries.

Thanks to our sponsors, clubs and individuals, and the helping heads and hands which made this expedition possible. Paper-QSLs are on their way, LoTW and OQRS are activated. 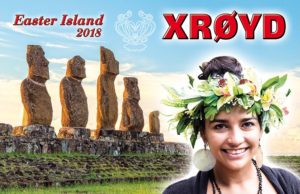